This year I went just to watch the different extreme left groups and to take some pictures.

Near to the Opera a young woman in black with a mask in the colour of the American flag and on the back “This help kills”. 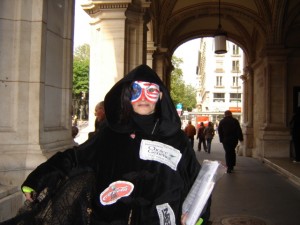 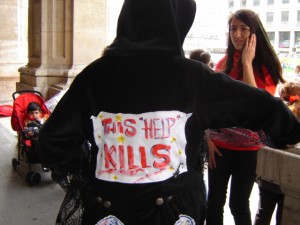 This very help – the care parcels from the USA – made it possible for many Viennese to survive after the war. Anti-Americanism is the stupidity of the 21st century. 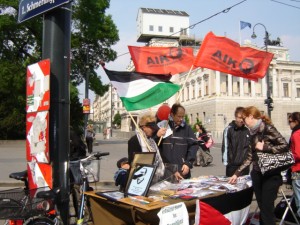 Anti-imps distribute an Appeal for the removal of Hamas from the EU terror list with the remark “Outstanding personalities signed”. I found the following names on it: Tariq Ramadan and Tariq Ali, Gilad Atzmon, Norman Finkelstein, James Petras and that indefatigable anti-Semite Gretta Duisenberg.

The Irish Solidarity (Republican Sinn Fein) tout distributes a leaflet, telling us, that their aim is a “Socialist Republic consisting of the 32 counties of Ireland, it should consist also of Scotland, Wales, Isle of Man, Cornwall and Brittany. Though this be madness, yet there is method in ‘t.

A middle age lady named Farah Notash gave me a small piece of paper asking me to “forward to the world” her poem “Zionist accusation” starting with an interesting statement: “You don’t have to be a Jew…to be a Zionist” The lady – a one woman enterprise, has put up a little stand in front of the Austrian parliament 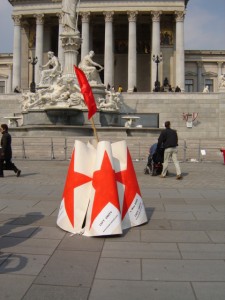 She demands “Left Unity”, and starts in one of her many leaflets with the statement: “No doubt unity is a lever of power” and recommends that we read the following: “What is do be done” and “Who are the friends of people?” by V.I. Lenin.

She also pours out her sorrow about “this dark depressing stage of imperialistic expansion”.

Revolution is not round the corner – at least not in Vienna.