The State of Israel paused Monday night at 8 p.m. in memory of the six million Jews who perished from 1933-1945, as the country marked the start of Holocaust Remembrance Day.

The annual state ceremony ushering in the start of the 24-hour commemoration began after sunset at Jerusalem’s Yad Vashem Holocaust Memorial.

The solemn hour-and-a-quarter opening event, broadcast live on television channels and radio stations, was attended by President Shimon Peres, Prime Minister Binyamin Netanyahu and the chairman of the Yad Vashem Council and Holocaust survivor Tel Aviv Rabbi Yisrael Meir Lau, as well as scores of dignitaries and ambassadors from around the world.

The central theme of this year’s ceremony is Children in the Holocaust. Some 1.5 million Jewish children were killed by the Nazis.

During the ceremony, which included a mix of speeches and somber musical interludes, six torches were to be lit by survivors in memory of the six million Jewish victims of the Holocaust. The chief rabbis of Israel will recite a selection from Psalms as well as the kaddish mourning prayer.

A 16-year-old will play a violin that belonged to a 12-year-old partisan, Mordechai (Motele) Schlein, killed in the Holocaust and whose violin is on display at the Holocaust Museum.

All places of entertainment were closed on Monday night.

A two-minute siren will sound on Tuesday at 10 a.m. at the start of a series of daylong ceremonies throughout the nation.

Here’s a photo of Israeli motorists observing the two-minute siren in 2007: 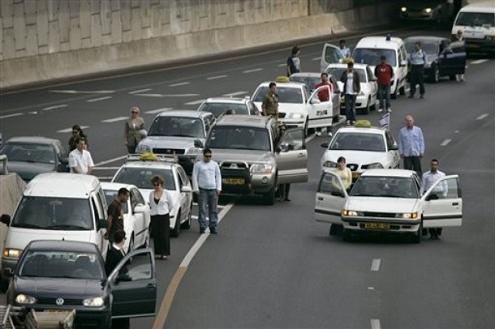