There’s been something of a tempest in a teapot (to use the American equivalent of the dreaded-by-Harry’s-Place-readers “storm in a teacup”) over photos of President Obama greeting and shaking hands with Hugo Chavez at the Americas Summit in Port of Spain, Trinidad. 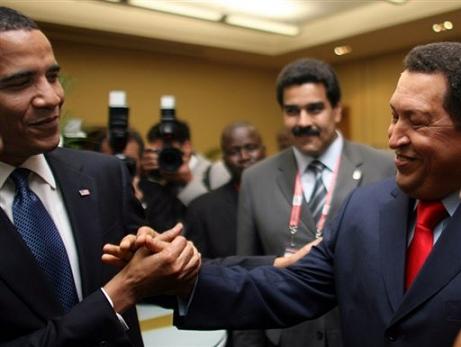 Chavez said he also shook George Bush’s hand eight years ago– which is entirely possible, although I can find no photographic evidence.

Even though I was a little startled to see it, I can’t claim to be terribly upset. In fact it continues the process– which began with Obama’s election– of depriving Chavez of his favorite all-purpose punching bag; i.e., Yankee imperialism. The Bush administration’s tacit approval of the 2002 coup which briefly removed him from office gave Chavez a powerful tool with which rally his supporters. That’s clearly yesterday’s news now. As Chavez struggles with a sharp drop in the oil income which has helped him maintain power, he will find Obama to be a less convenient scapegoat than Bush was.

In fact it’s rather amusing to observe how disoriented Chavez seems to be now that El Diablo himself, George Bush, is no longer in the picture.

Chávez appears to be groping for the right approach to Obama, oscillating in recent weeks between acerbic criticism and conciliatory praise. When Obama said that Chávez aids Colombia’s Marxist guerrilla violence (which Chávez in fact has renounced), the Venezuelan President shot back that Obama had “the same stench” as Bush. But when the U.S. Coast Guard called Venezuelan authorities last week for permission to board a Venezuelan boat involved in a cocaine bust, Chávez called it a “positive signal that never would have happened” under Bush.

As long as Obama doesn’t back off from his sharp criticism of Chavez’s autocratic rule, I can tolerate a few photos of smiles and handshakes– in fact a little easier than I could Bush’s hand-holding and sword-dancing with, or even Obama’s bowing to, the Saudi rulers.