Inevitably one is drawn to compare this play with the other post-Gaza play in London (‘Seven Jewish Children’ – now finished).

But with the exception of their one-sidedness, they are very different. For a start ‘Seven Jewish Children’ has only Jewish characters whilst this play has only Palestinians (apart from a Jewish conscientious objector). ‘Seven Jewish Children’ is a ten minute canter through 70 years (or possibly 130 years – it’s that imprecise) of Jewish and Israeli history, albeit a highly selective canter, while this play is very much set in the ‘here and now’ in Gaza.

‘Seven Jewish Children’ was subliminal, with Caryl Churchill using “what shall we tell the children?” (whom we never meet) jigsaw puzzle pieces to build a thoroughly ugly false picture of Israelis. By contrast, this play is much more direct. Its dramatic thread is about a man (played by Amir Boutrous) who is exhausted by the constant confrontations in Gaza and is seeking the best way to die. His counsellor is Abu Mohammed (Rupert Mason) who ‘works for the sewerage authority’ and smuggles goods through the tunnels through to Egypt (there is no mention of the arms that are smuggled through). Soon a mother and her daughter, a choreographer, appear in the wasteland set (Fisun Burgess, Alia Al-Zougbi) and the daughter dances ‘because it’s the only thing that makes us feel alive’.

The play is meant to show the horror of life in Gaza after Israel said ‘enough is enough’ and in some respects it succeeds. The scene late in the play, for example, when a girl becomes so disoriented after being confined in a small room for a long time that she is blinded to the dangers of walking to the market, is moving. And the scenes of humanitarian tragedy are suitably framed by the singing and ‘oud’ (a Middle Eastern instrument) of Nizar Al-Issa. But the obvious falsehoods do a disservice to the truthful parts of the play, since they lead us to question the veracity of everything we see. There were no general losses of electricity in Gaza – though there were localised losses. And there were no reports of people having to drink sea water.

Mixed into this framework are video clips of actual newscasts and actors playing John Ging (the Irish UN spokesman) and Omer Goldman, an Israeli conscientious objector, who refuses to serve in the army, and who compares the Israeli Defence Force with Hamas. Again her words convey a falsehood. She speaks about the IDF bombing an UNRWA school and killing 42 innocent people. She was able to say it because John Ging did not disabuse people of the belief that there were deaths in the school even though he knew there were none. Later it turned out that 12 had died – not 42 (see Jerusalem Post, 19 February) and that none had died within the school, since Israel did not fire into it. This information came with the help of a teacher who witnessed the shelling – and who refused to give his name, saying that UNRWA had told the staff not to talk to the news media.

The producers of the play might defend it by saying that the words of Goldman were contemporaneous, before the truth about the school was known. But that is not a valid excuse – they could have easily adjusted the script when the truth became known.

The most striking thing about “Go To Gaza, Drink the Sea”, though, is the set. Nizar Al-Issa at times sings and plays from the top of a mountain of shoes. Other characters emerge from within it.

Here is the set designer, Jane Frere, speaking about the shoes:

“ …. I stumbled across shoes again when I made a succession of visits to the former Nazi concentration camp at Majdenek in Lublin, East Poland. I was so overwhelmed by the vast scale of the massed piles of shoes – testimony to the many thousands who died there – that I filmed them for a video installation. Ironically it was in Majdanek that I conceived the idea for my art installation, “The Nakbah Project, Return of the Soul”, which relates to the consequences of the holocaust and the subsequent displacement of three quarter of a million Palestinians when the state of Israel was formed in 1948. In Go to Gaza, Drink the Sea, the mountains of shoes can represent a desecrated landscape, pulverised by the bombardment of tonnes of explosives from air, land and sea. At the same time the shoes can have many meanings, symbolizing people both dead and alive.”

Indeed, there is a great similarity between the pile of shoes in the set of this play and the shoes in Auschwitz. 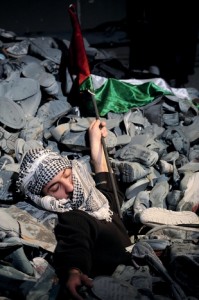 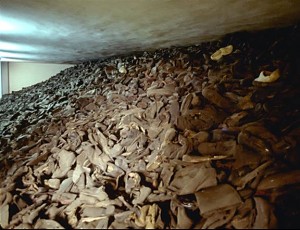 The set designer clearly feels it appropriate to use the shoe metaphor to compare Gaza to Auschwitz. That is an entirely invalid comparison and indeed an antisemitic one. And antisemitic content and/or intent is the other feature that this play shares with ‘Seven Jewish Children’.