Now, as you know, I’m a supporter of the banning of active and proselytising bigots from the United Kingdom. I acknowledge that, in these days of Skype, such a governmental act is essentially symbolic in nature, only. Nevertheless, when the Home Secretary sends one of her famous letters out, she is marking in the most official way possible, our society’s rejection of hatred and discrimination.

Now, it will be interesting to see if this [i.e. the banning of Fred Phelps’s Westboro Baptist “Church”] provokes the same outraged denunciations of the suppression of free speech as the Wilders ban did, won’t it? Don’t hold your breath.

This member of the Islamophobia Watch collective takes a consistent line on such issues. Freedom of expression doesn’t cover the right to incite hatred against minority communities, and people who want to enter the UK to do this should be excluded. As in the Wilders case, Jacqui Smith has made the right decision here.

I do think that Geert Wilders is an anti-Muslim bigot. I believe that it is possible to be strongly critical of the tenets of certain iterations of Islam, without inciting hatred. Were Geert Wilders to rule out an alliance with the barely crypto-fascist Vlaams Belang, and were he to oppose ‘encouraging’ Muslims to leave Holland, then I’d defend him gladly. But he has not done so.

Now, who has this Government banned to date?

We’ve had a refusal of a visa for my co-blogger, Yusuf Al Qaradawi. But not a permanent ban.

We’ve also had a ban on Feiglin.

Then, last week, we had that weird and nasty self publicist, Fred Phelps, shown the door. Given that the Westboro Baptist Church – more of a Deliverance-style family than a religious institution – operates by courting our disgust, I’m not sure what we’ve achieved there. But still…

Ghoneim got in, though. Here is a man, banned from country after country, the singing Jew-hater, allowed to attend what was very clearly a Hamas fundraiser. How did this happen?

Isn’t it about time this Government showed a level of consistency? 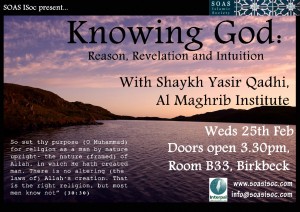 This Wednesday, Yasir Qadhi will be speaking to the SOAS Isoc. He may be in this country already. If he is not, Jacqui Smith should act now to prevent him from attending, in person, at this event.

Even if you do accept that he is a reformed character in that respect, Qadhi should be banned for his vicious theologically driven hatred of Shi’ites.

As Bob Pitt put it:

“This member of the Islamophobia Watch collective takes a consistent line on such issues. Freedom of expression doesn’t cover the right to incite hatred against minority communities, and people who want to enter the UK to do this should be excluded.”

So, I challenge him to join with us in calling on Jacqui Smith to ban Qadhi today. Don’t delay!