Richard Seymour’s tome ‘The Liberal Defence of Murder’ has been reviewed in the Guardian Books section today. I’m afraid it’s not likely to be welcome news for the chubby Trotskyist blogger as the book gets right royally panned.

As a service to the author I translate below some of the more rarified phrases used by the reviewer to explain what he actually thinks of Seymour’s work:

Philippe Sands QC: Who can say, after all, the real reason that President Bush decided to go to war in Iraq, or what truly motivated a particular individual to lend support. Beyond instinct or intuition, both issues require mastery of many factors – history, geopolitics, money, psychology, political philosophy, to suggest but a few. To engage in both tasks, as Richard Seymour does with this ambitious book, is to undertake a project that faces considerable hurdles.

Translation: Oh dear. Some callow fellow, rather out of his intellectual depth, has written a one-dimensional pamphlet that might pass muster with the more impressionable members of the Socialist Workers Party: but, how can I say this without being too obvious, normal people might want to think twice before handing over £16.99 for the result of the poor chap’s efforts.

Philippe Sands QC: Seymour believes that the US has long been engaged in an imperial enterprise, and that its foot soldiers include a great number of liberals and progressives. The charge is deep. It may be sustainable for some of his targets, in some instances, but the generality of the attack undermines its effectiveness.

Translation: The silly bugger’s been soaking up crude political propaganda for so long he can’t actually marshall evidence in any effective way: nor apparently can he construct anything resembling a rational argument. How depressing. I was hoping it might at least be semi-coherent as I have some sympathy for the point he seems to be trying to make.

Philippe Sands QC: the US has used force for a multitude of different reasons over the past five decades, and that some instances are justifiable whereas others are not. In short, not every use of force justifies a charge of murder. You need some basic criteria to distinguish between what is just and unjust, lawful and unlawful, murderous or not. Seymour doesn’t identify any.

Translation: Oh I say, the author clearly has an inflated sense of his own cleverness doesn’t he? but he hasn’t even started with the basics of an interesting argument here. What do they teach them in schools these days?

Philippe Sands QC: So the book becomes a bit of a rant. In charting the intellectual roots of this apparently open-ended appetite for violence, mayhem and murder, important points of detail are missed – what was the justification for the war? – and the transformed framework of rules and principles is bypassed. Iraq I was explicitly authorised by security council resolution, Iraq II was not. Afghanistan was, at least initially, seen to be justified by the unanimous security council resolution 1373, an act of self-defence. Many will not be pleased by such security council actions, but their existence has important consequences and they cannot be ignored.

Translation: Good grief, this is getting even worse. How can that be humanly possible ? Do I really have to spell the basics out to a person who claims to be interested in the subject matter he’s written a whole book about?

Philippe Sands QC: The Liberal Defence of Murder glosses over vastly important issues. Was the post-second world war human rights project intended to create new conditions of colonial domination? Has it contributed to circumstances in which there will be more oppression and misery, rather than less? Have the economic rules promoting globalisation engendered war? A scattershot aim at “liberal and progressive intellectuals” doesn’t hit home.

Translation: I must check exactly much I’m being paid for wading through this imbecile’s pretentious dreck masquerading as political analysis. Have I really got nothing more constructive to do with my spare time? Oh, hello, that silver plated paperknife looks like it needs polishing again.

Philippe Sands QC: The generality of Seymour’s conclusion, the broad sweep of his argument and the passion of his attack are overstated, dissipating their force.

Translation: *Sigh* This is the most poorly researched, intellectually muddled collection of crudely stitched together anecdotes and misunderstandings I’ve ever had the misfortune of reviewing. I’m something of a Stopper myself but golly, this stuff is just plain embarrassing to our political cause. Do not, repeat do NOT,  purchase this book if you have an IQ anywhere north of 103.

Poor Richard, the book got such a good write up when it was reviewed by his mates too. 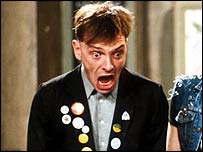