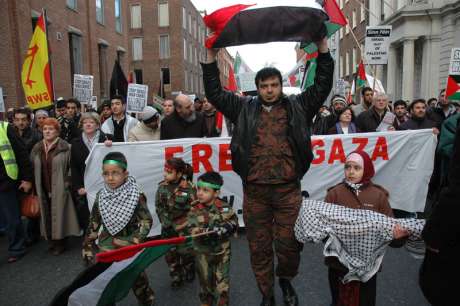 But this picture was taken in Dublin, not in a Hamas-run town in Palestine.

Children dressed as Hamas soldiers led the Gaza protest in Dublin last week. The protest was organised by the Ireland Palestine Solidarity Campaign. They evidently had no problem with putting child “soldiers” at the front of their parade. They must have thought that what goes down well in Gaza, would also play well in Ireland.

Reactions were mixed. Here are a few of the comments posted on the Indymedia site:

I was less than impressed when I saw the completely unnecessary and counter-productive burning of the Israeli flag on Kildare Street. I put this down to the anger of a small unrepresentative group of very angry people. But, having now seen these further photographs of children at the head of the march dressed by their parents in military fatigues and the further flag-burning outside the GPO I am thoroughly ashamed that I gave my support to the IPSC and their demonstration today.

Congratulations for doing the Israeli propaganda machine’s work for them. You have done the Israeli war machine a great service in Dublin today.

The burning of the Israeli flag and the militarisation of children is completely innappropriate.

IPSC must eliminate this imagery from it’s campaign in order to have any chance of achieving solidaity for Gaza here.

What am I supporting?

i thought these protests were for nonviolence, for peace, no more killing

images of child soldiers marching in dublin – what message does that convey???

A number of other attendees on the march were upset by the shouts of “Allah Akhbar”, which they recognised as a “sectarian” chant.

Ireland understands these things, better than most.

When will the Left decolonise?