According to this report accused perjuror and erstwhile people’s champion Tommy Sheridan is planning on following George Galloway’s slimy trail from a position as a semi-serious leftwing politician to a national laughing stock.

Remember Galloway attempting – not entirely convincingly it must be admitted – to argue that his appearance on the televison show Big Brother would mean his ‘message’ to the oppressed of the world would get a wider audience?

The People’s Tommy isn’t even making a half-arsed attempt to pull the wool over anyone’s eyes regarding his reasons for deciding to appear on the show:

“They made a very generous offer but there were no guarantees of communicating my political ideas.”

Translation: I’m only in it for the money.

How are Sheridan’s dwindling band of supporters going to spin this particular kick in the teeth? Answers in the usual place… 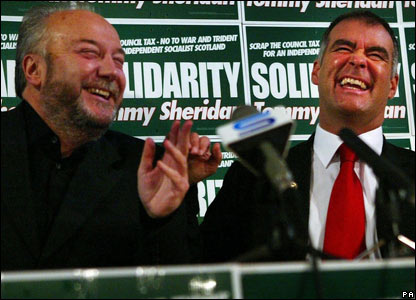 It seems very sensible of Mr Sheridan that he should take steps to get used to living in a confined space while living with unpleasant people he doesn’t know.