When we last spent time with Mr Ali, he was busy telling a bunch of credulous churchmen how deeply opposed he was on religious grounds to all nuclear weapons, while cheerfully informing the Islam Channel that he supported a nuclear armed Iran.

In the exchange Inayat confesses to have been a long time opponent of attending the event, but explains that he has changed his position, not because it was a disgusting one, but because “it became apparent to me that the MCB was doing itself more harm than good by staying away”. Others justify the decision by explaining that HMD involvement will allow them to subvert the event, to ” highlight the hypocrisy of Zionists who use the persecution of one people to excuse the persecution of another”. Azad Ali chimes in:

As for the MCB flattering itself in thinking it can influence, change and achieve its stated aims…that is not flattery brother – that is simply being Muslim – as we know Muslims are always positive, never disheartened by the challenge ahead, in fact Muslims are full of Himma…so you may say why has the government started to lock people up for “thought crimes” but you do not fully appreciate the lobbying and the change that the MCB has brought about in fighting against these causes, the fight against the Banning of HT [Hizb ut Tahrir], the pre charge detention or the influence of duplicitous foreign policy of our government. All these things MCB raises at every juncture and opportunity.

You final sentence is quite a defeatist statement… you say “the Zionists have a slick PR machine in place, the Muslims have only stupidity on their side” Brother who is stupid enough to make such a statement? Is our measure of success the same as the Zionists? Reflect a little on your deen akhi and do not get so worked up about a decision you disagree with which leads you to become defeatist!

Your final comment in post 33 is woeful akhi “As a new \’moderate\’ and friend of the zionists, I fully expect Inayat Bunglawala to stay quiet and say nothing when that charge is levelled against us \’extremists\’.”

Why is it easy for you to forsake your brother, even when he makes a wrong (not sinful) decision by consultation with its members? By all means counsel, as the deen is nasiha…but why do you forsake your brothers? Is this not the defeat that the Zionist are looking for?

Temper your response…Allah will ask about these comments.

Allah may or may not ask about these comments. However, there is one of Azad Ali’s comments that is worth discussing.

If your argument is that HMD is run by Zionists then that is not good enough…because we know that Zionist run much more than that even down to some of our “favourite” cola’s!

Can this be true?

A couple of years ago, Coca Cola was the victim of an attempt to destroy its reputation in Muslim majority countries. Despite the fact that Coca Cola had a plant in Ramallah, the urban legend circulated that Coca Cola had given “four days worth of income to Israel”. Yvonne Ridley has told a rally that “drinking Coca-Cola is like drinking the blood of Palestinian children“. I would have thought it was fizzier. The following fake advert also did the rounds at the time: 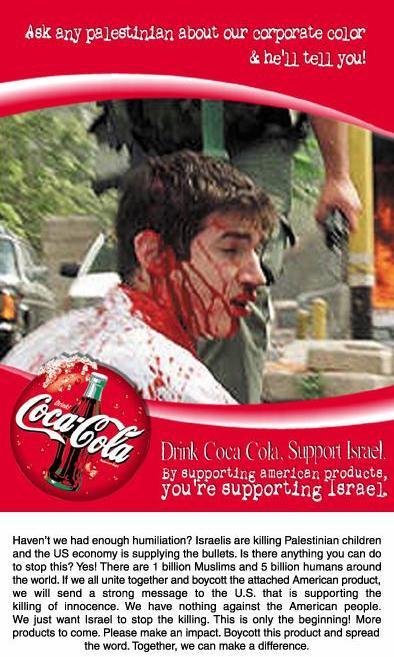 Those with a good memory will remember that the young man with blood streaming down his head, was originally mis-identified as a Palestinian, beaten by a savage Israeli policeman by the New York Times:

So it turned out, the bloody man was not a Palestinian at all:

Regarding your picture on page A5 of the Israeli soldier and the Palestinian on the Temple Mount — that Palestinian is actually my son, Tuvia Grossman, a Jewish student from Chicago. He, and two of his friends, were pulled from their taxicab while traveling in Jerusalem, by a mob of Palestinian Arabs, and were severely beaten and stabbed.

That picture could not have been taken on the Temple Mount because there are no gas stations on the Temple Mount and certainly none with Hebrew lettering, like the one clearly seen behind the Israeli soldier attempting to protect my son from the mob.

But we digress. If Coca Cola is not bottling the blood of Palestinian chidren, what about Pepsi Cola?

Pepsi’s name may be a reflection of its predecessor, “Pep Cola”, or reflect its supposed value as an aid to digestion. However, as the drink was named in 1898, it is not likely that it stands for:

Pay Every Penny to Save Israel

Recycling of lunatic conspiracist canards – all in a day’s work for Mr Ali.

I had completely forgotten this: