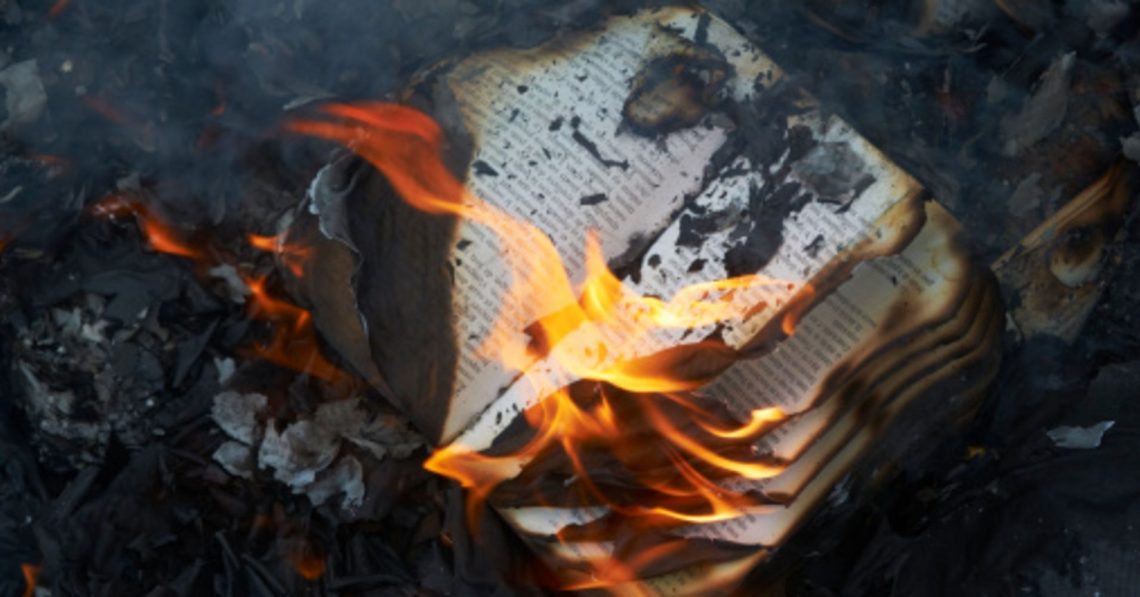 Shamima Begum has been a gift to the right-leaning tabloid press. Over three-quarters of us would like to see her stripped of citizenship and barred from returning to Britain, according to a YouGov poll, and the tabloids have been happy to lead the cheer. Don’t get me wrong, I’m totally on board with keeping the witch out of the UK – along with all her (literal) fellow-travellers to the Islamic State – by any means we have available to us. If there are legal impediments to us doing so I hope our politicians have learned a lesson and will apply themselves to creating legislation to protect us from these vile and violent people. We certainly do not need more radical Islamists among us.

But this view is not shared by the preening prosecco prosaists of the progressive press.

First off, in a supposed new ‘review’ of The Stanatic Verses on the occasion of its 30th anniversary, Sean O’Grady of The Independent manages to ignore the book almost entirely and instead writes a screed which pits the far right against the Islamist protesters calling for the death of Salman Rushdie in 1989. In an age obsessed with racial politics it is not very surprising that an issue all sensible people see for what it is – an intolerant religious fanaticism reacting to secular modernity and freedom of expression – is recast as an oppressed community facing off against racist skinheads.

The defiant dereliction of a duty to review the book on its literary merits is demonstrated in the essay’s conclusion. It is a breathtaking example of how progressives have disappeared down a fascist rabbit hole:

Rushdie’s silly, childish book should be banned under today’s anti-hate legislation. It’s no better than racist graffiti on a bus stop. I wouldn’t have it in my house, out of respect to Muslim people and contempt for Rushdie, and because it sounds quite boring. I’d be quite inclined to burn it, in fact. It’s a free country, after all.

Yes, ladies and gentlemen, the Associate Editor of The Independent and its reviewer of books is now a book-burner. And he is not ashamed to say so.

Down the road at The Guardian, we have column inches given over to one Ali Nobil Ahmad whose Guardian biography tells us is a researcher at the Leibniz Zentrum Moderner Orient in Berlin and former recipient of the Scott Trust bursary.

“Why it’s OK for young Muslims to be radical,” he coos reassuringly by way of a headline above a photo which might well have been of Shamima Begum five years ago. The photo is captioned:

‘Muslims in the UK who have grown up after 2001 have done so in an era of nihilistic surrender to the capitalist world order and political status quo.’

Yes, this is the very essence of the Islamist-Progressive nexus. Pasty progressive keyboard warriors – their limbs weak and attrified by life in the glow of phosphors and punishing vegan diets – need the vital and energetic muscle of Islamism to prevail in the final showdown between Progress and the imperialist, neo-colonial, neo-liberal, capitalist patriarchy.

And that is precisely what follows in Ahmad’s article in which he outlines the various grievances of the social justice warrior and explains why Muslim youth are particularly attuned to this (as opposed to their white counterparts who he glibly dismisses as only ever experiencing “the fleeting experience of the average student gap year”. In contrast:

The ummah, or “community of believers”, wherever in the world they are, is a powerful idea among many young British Muslims, attuning them to suffering and injustice in other countries. Many have family that originated in Asia and Africa.

It is the language of us and them, and is it any mystery why the outcome is in many cases so predictable? Of course he is quick to distance himself from this outcome:

To be clear: theologically grounded attempts to bring social change are beset with problems. But rather than treat young British Muslims as children in need of inoculation against the dangers of politics, how about providing an authentic political education, distinguishing progressive ideas from retrograde ones through informed debate?

His article gives clues as to what these “progressive ideas” might be. They are the ideas of the far-left: obsession with Palestine, with race, and with notion that pride in one’s country’s achievements is “retrograde”.

It is hard to say what is more dangerous in the long term: Islamism, or far-left progressive politics. But for the time being, it is not hard to see why the likes of The Independent and The Guardian and their progressive readers want to keep Muslim youth radical and politicised. But more importantly, it is vital that every sensible, moderate, champion of liberal democracy resist the project to polarise citizens across racial and religious lines, undermine the values of freedom of expression, and frame ‘radicalism’ as some romantic driver of progress rather than what it is – the harbinger of violence and suffering.