To me, what’s most disturbing about this clip from Iranian state TV isn’t the usual antisemitic, Holocaust-denying crap, or the fact that allegedly leftwing Respect members continue to operate under the leadership of a man who accepts without protest paychecks from the same government that produces it. (I have to wonder, given the recent crash in oil prices, if Press TV will soon be a luxury the Islamic Republic can no longer afford.) 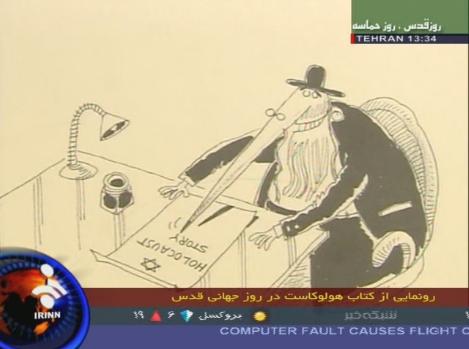 What really infuriates me is the background song, which you may recognize as “The Street Where You Live” from the Broadway show “My Fair Lady.”

Besides the utter incongruousness of using that music to lend a “light” touch to the disgusting report, it’s worth noting that “My Fair Lady” was written by Alan Jay Lerner (an American-born Jew) and Frederick Loewe, who was born in Berlin to a Jewish father and came to the US with his parents in the 1920s. Of course if the Loewe family had remained in Berlin, Frederick and his father almost certainly would have been victims of the Holocaust that the Islamic Republic’s stooges insist (to the tune of his music) never happened.

Finally, I’m angry for my mother, who loved “My Fair Lady” and played the original cast album constantly while I was growing up. (The voices of Julie Andrews, Rex Harrison and Stanley Holloway are drilled into my brain forever.) That something she adored so much was used by Iranian TV for such appalling purposes– well, I take that personally.