I don’t want to gloat over it (far better if he had been defeated politically), but the far-right, anti-immigrant Austrian politician Joerg Haider has been killed in a car accident.

Here he is pictured in one of his natural settings, one of many such groveling Europeans and Americans, ranging from Donald Rumsfeld to George Galloway: 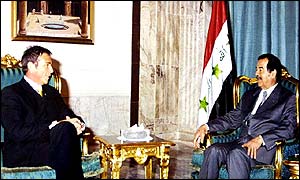 Update: Some interesting details from The Washington Post obituary of Haider:

At times, Mr. Haider’s followers would start singing “Tomorrow Belongs to Me,” an anthem from the musical “Cabaret” that symbolized the Nazi takeover of Germany in the 1920s and 1930s.
…..
As a young man, he practiced fencing with a straw dummy labeled with the name of Simon Wiesenthal, the Vienna-based hunter of Nazi war criminals.
…..
To great applause, Mr. Haider lauded a group of Waffen SS veterans at a 1995 reunion as “decent men of character who remained faithful to their ideals.”
…..
Mr. Haider lived on a 38,000-acre estate that provided a generous income from inherited forestlands. An uncle had bought the property at a bargain price after its Jewish owners were forced to flee in 1938.