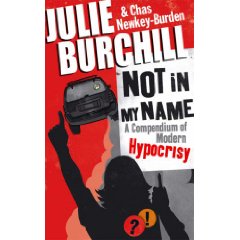 Not In My Name: A Compendium Of Modern Hypocrisy, the book I co-wrote with Julie Burchill, has become most famed for its attack on the Green movement. This is largely thanks to George Monbiot who keeps getting his expensive knickers in a twist over Julie’s attack on the elitism of the climate-change movement. Never mind, George, the book is no kinder to two of your other favourite movements: the Palestinian bandwagon and the anti-war movement.

I believe that with a few honourable exceptions, the ‘pro’-Palestinian bandwagon doesn’t give a toss about the Palestinian people but merely uses their predicament to bash Israel, which it hates for the most sickening reason. When Israel defends itself against incessant Palestinian aggression, we rarely hear the end of the bandwagon’s outrage and concern. Yet when Palestinians are struck by their other neighbours, it’s quite a different story.

For instance, when the Lebanese army indiscriminately attacked a Palestinian refugee camp, where were the anguished protests of the Palestinian lobby? Likewise, when Palestinian students are shot by their own people, when women are stabbed to death in ‘honour killings’, when Palestinian gays are executed, those who claim to care about these people’s well-being lose not a moment’s sleep on their behalf. Why? Because these cases offer no chance to bash Israel.

As for the anti-war movement, it was mind-boggling to witness their fury that Tony Blair wouldn’t listen to their voices as they gathered with their narcissistic ‘Not In My Name’ banners. How dare he be so undemocratic, they raged, as they marched to prevent Iraqi people from having the chance to acquire even a hint of democracy themselves. This ‘concern’ for the Iraqi people was shown to be a sham when, during an anti-war debate in 2004, they coldly ignored an Iraqi exile’s emotional plea that the coalition be allowed to complete the liberation of her country.