Press freedom returns as a topic of discussion over at The Guardian’s Comment Is Free.

Professor Anton Harber, former editor of the Mail & Guardian reacts to the furore over this cartoon by the artist Zapiro: 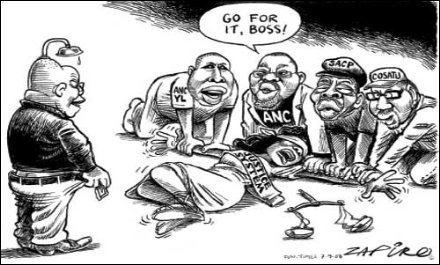 The cartoon in question certainly pushed the boundaries of good taste and fair comment. It was crude and explicit, breathtakingly so. And therefore hard to defend…

… It is always cartoons like this – the ones hard to justify – that need defending. It is not easy in a new, young and fragile democracy to defend the right of a cartoonist to be tasteless, demeaning, even unfair. But it has to be done.

You can read the argument in-between at CiF.

I’m not entirely sure the cartoon is hard to justify, but I suppose if you want to play the voice of reason…

On a similar theme, Peter Tatchell – also at CiF – writes:

The escalating persecution of journalists in Iran is symptomatic of the regime’s fundamental weakness, despite its macho posturing and tyrannical repression.

President Ahmadinejad and his clerical cronies are afraid. They have concluded that censorship of the media is necessary to save their ugly regime. They are also prepared to jail and, in some cases, execute reporters who dare to tell the truth about their tyranny.

In one sense, Ahmadinejad is right. The truth is dangerous. If Iranians knew about the massive scale of human rights abuses by their government it would arouse huge popular discontent.

But is that what it’s really about? Danger to the regime? Or – in both cases – is it not merely the hurt feelings of bullies with over-inflated egos acting out because they have the power to do so?