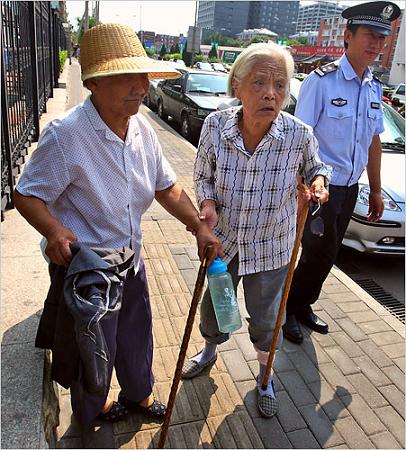 Two elderly Chinese women have been sentenced to a year of “re-education through labor” after they repeatedly sought a permit to demonstrate in one of the official Olympic protest areas, according to family members and human rights advocates.

The women, Wu Dianyuan, 79, and Wang Xiuying, 77, had made five visits to the police this month in an effort to get permission to protest what they contended was inadequate compensation for the demolition of their homes in Beijing.

During their final visit on Monday, public security officials informed them that they had been given administrative sentences for “disturbing the public order,” according to Li Xuehui, Ms. Wu’s son.

Mr. Li said his mother and Ms. Wang, who used to be neighbors before their homes were demolished to make way for a redevelopment project, were allowed to return home but were told they could be sent to a detention center at any moment. “Can you imagine two old ladies in their 70s being re-educated through labor?” he asked. He said Ms. Wang was nearly blind.
…..
The two elderly women were given administrative sentences to re-education through labor, known as laojiao, which seeks to reform political and religious dissenters and those charged with minor crimes like prostitution and petty theft. Government officials say that 290,000 people are detained in re-education centers for terms ranging from one to three years, although detentions can be extended for those whose rehabilitation is deemed inadequate.
…..
Although it is unlikely that women as old as Ms. Wu and Ms. Wang would be forced into hard labor, many of those sentenced to laojiao often toil in agricultural or factory work and are forced to confess their transgressions.