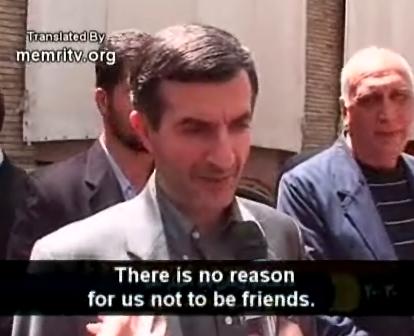 Can anyone with an understanding of Iranian politics (as much as it’s possible to understand) explain what’s going on here?

It appears that Esfandiar Rahim Mashaii, the country’s vice president for cultural heritage (whatever that means), said Iranians are friends with the people of Israel. State-controlled Iranian TV expressed outrage, and reported denunciations by a foreign ministry spokesman and speaker of parliament Ali Larijani. Asked to respond, Mashaii rather boldly said:

In the name of Allah, my statement was very simple and clear, but they presented it in a misleading manner, and later, they denied it as well. My statement was that we, the Iranian people, are friends of the whole wide world, even the people of Israel and America. There is no reason for us not to be friends. I did not deny having made this statement – and I am not denying it now. Absolutely not. I am proud of what I said, and I will say it again a thousand times.