Every Presidential election year– in the summer, after the parties’ nominees have been decided but before the party conventions– there is a sort of silly season when events that will end up as minor or forgotten footnotes in history are boosted by a story-hungry media into brief but intense brouhahas.

Such is the case with the cover of the latest New Yorker magazine: 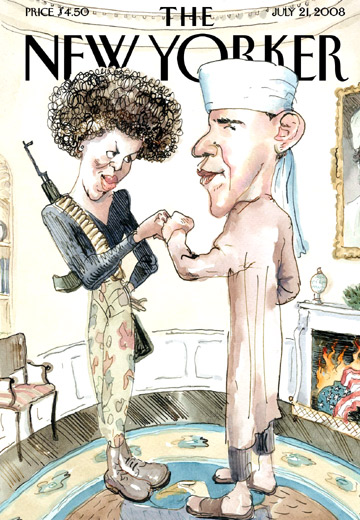 Now I hope I don’t need to explain to anyone that the cover is not an attack on Barack and Michelle Obama, but rather on some of their vicious and hysterical critics– a few of whom have been known to comment at Harry’s Place. It’s sort of the pictorial equivalent of the sarcastic way that I and others sometimes respond to those comments.

One would hope that this sort of mockery of the wild stories circulating about the Obamas– including the dreaded “terrorist fist jab”— would shame the rumor mongers. Of course this won’t happen, but I think this kind of ridicule helps defuse the impact of the rumors and wild speculation.

Unfortunately, instead of laughing it off, Obama’s campaign reacted indignantly to the cover:

“The New Yorker may think, as one of their staff explained to us, that their cover is a satirical lampoon of the caricature Senator Obama’s right-wing critics have tried to create,” Obama spokesman Bill Burton said.

“But most readers will see it as tasteless and offensive. And we agree,” he said in a statement.

On the contrary, I believe most readers– and most Americans, regardless of their politics– will see it for the satire it is. I think Mr. Burton– perhaps influenced by nervousness about the under-the-radar anti-Obama smears of recent months– underestimates the intelligence and good sense of most Americans. The influence this will have on the election in November is as close to zero as it is possible to get.

I suspect everyone will calm down about this in a few days, when the next silly-season brouhaha bursts forth.