It is common knowledge that dogs are considered dirty animals in the Islamic religion. In 2002, an Iranian hardline cleric was so concerned about pet dog ownership he issued the following statement:

“I demand the judiciary arrest all dogs with long, medium or short legs – together with their long-legged owners,”

Of course, dogs are disgusting, or rather their owners are when they allow their dogs to lick their faces or sleep in their beds. Cats are a different matter in Islam. The founder of Islam loved cats, famously cutting the sleeve of his coat so as not to disturb a sleeping feline. Yet, my cat is forever licking its arse. Both dogs and cats are vectors for disease. Which goes to show that some religious views from the past might have been entirely sensible at the time, even if the rationale for them was not known. Some risks may have been missed, and others can become less important with time and modern understanding of hygiene.

There is however, no Islamic edict that dogs are offensive in of themselves, outside of Mohammed’s view one should stay clear of dog saliva and wash seven times if you come in contact with it. Which is fair comment in my opinion.

On Radio 4 this morning it was reported that the Dundee Police had apologised for issuing the following postcard. 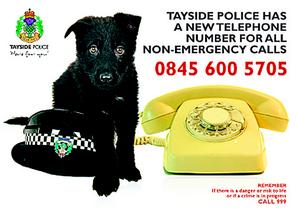 Shades of the Dudley Pig saga thought I, although it was probably going to be some liberal oversensitivity, rather than actual “Muslim outrage”© Melanie Phillips. In fact, it appears that the fuss was created by a Labour Party Councillor called Mohammed Asif. That would hopefully preclude him being a member of the awkward squad who seem to spend their time attempting to create divisions in society based on faith. He raised the matter of the postcards at a meeting of the Tayside Joint Police Board, and managed to extract an apology from the Police, who said:

‘We did not seek advice from the force’s diversity adviser prior to publishing and distributing the postcards. That was an oversight and we apologise for any offence caused.’

The ordinary furniture of life must not become the subject of political debate about community sensitivities. The Police should not have to submit a postcard for inspection by the diversity officer in case a puppy or cow might offend.

And the reason it is pathetic is not because we are caving in to “Dhimmitude”, as the more unhinged commentators suggest, but because the very community that is suggested to be offended is not in fact offended:

Shop assistant Irza Saeed said, however, Cheers would be happy to have the postcards featuring police-dog-in-training Rebel and advertising the new contact number for non-emergency calls to the police.

“We have a lot of customers of different cultures and religions but we are owned by Muslims and the workers are Muslim,” Miss Saeed said.

“I don’t feel that I’d be especially concerned or upset if we were given the postcards to distribute or that there would be anything wrong with that. However, it is part of Islam that we don’t have dogs around us.

“Most of our people are afraid of dogs but we try not to make a big deal of it.”

Mahmud Sarwar, trustee of the Scottish Islamic and Cultural Centre and the Dura Street mosque, didn’t have a problem with the cards either. He called for businesses to display them.

“I’ve not heard anything about that [the card] from members of the community,” Mr Sarwar said.

“I was round some shops today and at the mosque and nobody has said anything about it.”

Mr Sarwar said that religious sensitivities would prevent him from displaying the postcard on a building of religious significance but there was nothing to stop them being displayed in shops.

“There is not a dog—it is just a picture,” he said.

You can guess at the reaction of Daily Mail readers [scroll down]. Even Sunny Hundal buys the line that Muslims are upset and have a right to be upset, so it isn’t just the Daily Mail that is willing to uncritically accept the false “Muslims are offended” meme.

Councillor Asif should in future think before he opens his mouth and creates negative stories about his community. Thoughtless actions like this, and the subsequent spineless backdown from the Police, do the work of bigots for them. The Daily Mail’s reporting, as always, is lamentable, but it would help if people stopped themselves for a moment before they decide to speak for “a community” and gave a thought about how their words might reflect on the community they are presumably trying to protect.

Councillor Asif might also reflect on the fact that IslamOnline specifically allows the use of dogs for Police duties.