Union City, the email newsletter of the Washington, DC, labor council, reminded me that Monday was the 71st anniversary of one of the landmark events in American labor history– the Battle of the Overpass.

Actually it wasn’t much of a battle. A group of United Auto Workers union organizers– including future union president Walter Reuther– gathered to hand out leaflets to workers on a pedestrian overpass outside Ford Motor Company’s River Rouge assembly plant in Dearborn, Michigan. As a photographer for the Detroit News snapped pictures, a group of Ford, um, representatives approached: 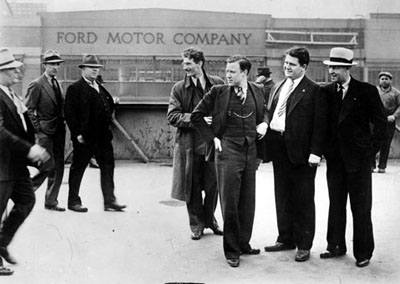 The photographer captured a candid shot of the Ford representatives, um, expressing their concerns to the UAW’s Richard Frankensteen: 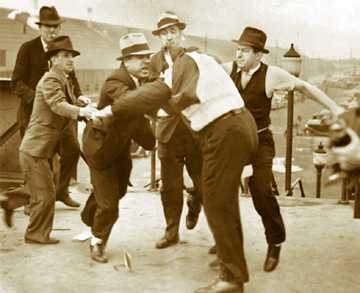 Others, including members of the UAW Ladies Auxiliary, were also punched and kicked. And this is what Reuther and Frankensteen looked like after the encounter: 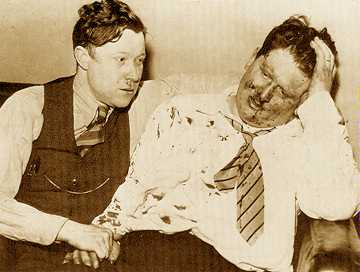 This created what today would be called a PR problem for Ford. The UAW finally won bargaining rights for Ford workers in 1941.

Coincidentally or not, company founder Henry Ford, who resisted unionization almost to the bitter end, was a famous antisemite who published the “Protocols of the Elders of Zion” in his widely-circulated newspaper The Dearborn Independent in the 1920s. In that sense he was sort of a spiritual father to present-day Hamas.