The more I look at PressTV, the more it becomes clear that the secondary function – beyond promoting the interests of the regime behind Ahmadinejad  – is to promulgate neo-Nazi material.

The European far Right doesn’t get much play in the British media. Because fascist politics in this country is very much a fringe pastime, the zany theories advanced by neo-Nazis tend to be given the “skateboarding duck” treatment. Quite properly, they’re not treated seriously: because they’re not serious arguments and those advancing them are not serious people.

A case in point is “Lady” Renouf: a David Irving groupie who was in her youth a glamour model of some sort. In recent years, Renouf has been active in forging links between the British far Right and the Islamic Republic, which has emerged as a state sponsor of Holocaust denial. She is also part of a group which calls itself the “New Right“, which brings together fascists (including BNP officers) with members of Islamist groups, including the Islamic Party of Britain, whose board includes Dr Mohammed “Dancing Cows” Naseem, one of the most senior members of RESPECT.

All this is, I admit, all pretty obscure. I expect that very few people have heard of Renouf and the various nutters and bigots who populate the circles in which she moves. That is wholly understanding. This is trainspottery stuff.

Not for PressTV, of course. Renouf and the Government of Iran are bedfellows: so for PressTV, she is an insightful pundit.

PressTV, which promotes and endorses the lies of the neo-Nazi Nicholas Kollerstrom also repeatedly features Renouf as a guest on their shows. Indeed, Renouf boasts that she played the key role in getting PressTV to shill for Kollerstrom.

About to appear herself on a Press TV live panel discussion Lady Renouf suggested to the channel, which at last offers UK viewers a democratic choice of information sources, that they interview Dr Kollestrom, who had been persecuted by the mainstream media, thus to provide him with some redress for the vilification and libel he has recently suffered following his scientific article published on a U.S. website.

On 14th May the channel duly filmed an interview with the science historian Dr Kollerstrom and a second interview with Lady Renouf, who provided the background regarding the stark contrast between the open democratic approach she had experienced at the Tehran conference, as compared to the tyrannical and closed programme of this year’s government sponsored Berlin conference, where no revisionist was invited – though the conference was supposed to be all about revisionists and their (source) criticism. 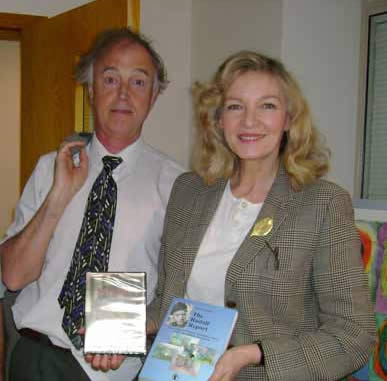 None of this is at all surprising. PressTV takes the views of neo-Nazis seriously. As the British propaganda arm of the Iranian Government, it regards neo-Nazis as allies.

I do not think that PressTV should be shut down by Government edict. If neo-Nazis want to broadcast their lies, then the State should not stand in their way. The British National Party has its own “BNP TV” virtual station on Youtube. PressTV is merely a better funded version of that station, with shows fronted by Andrew Gilligan.

I do think, however, that the British Government should take the following action. First, steps should be taken to prevent the flow of funds from Iran to PressTV in the United Kingdom. Iran is already subject to extensive financial sanctions. A simple amendment to the existing legislation should ensure that Iran’s propaganda arm operates from overseas, and not from within this country.

Secondly, non-UK nationals who are involved in this station should be deported, and new recruits should be prevented from entering this country. Great Britain can do very well without the presence of Iranians who have clearly come to this country in order to “foster hatred which might lead to inter-community violence” by establishing a TV station which pumps out racist lies. This Government excluded hatemongers, Qaradawi and Feiglin. It should use that power again, here.