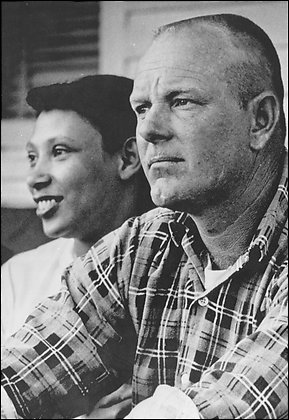 Mildred Loving, the black woman whose lawsuit against the state of Virginia led to the 1967 Supreme Court decision that struck down state laws forbidding interracial marriage, has died at the age of 68.

Her husband Richard, a construction worker, died in 1975.

After having a child in Virginia, the couple went to Washington, DC, to get married. However when they returned home, “Caroline County Sheriff R. Garnett Brooks rousted them from their bed at 2 a.m. in July 1958 and told them the District’s marriage certificate was no good in Virginia. He took them to jail and charged them with unlawful cohabitation. They pleaded guilty, and Caroline County Circuit Court Judge Leon M. Bazile sentenced them to a year’s imprisonment, to be suspended if they left the state for the next 25 years.”

These days, when interracial marriage is not particularly shocking, it’s important to remember how much bravery it took to do what Mildred and Richard Loving did in the still-segregated south of the 1950s and 1960s.