Some of the recent posts and comments here have got me thinking about C.P. Ellis and Ann Atwater. 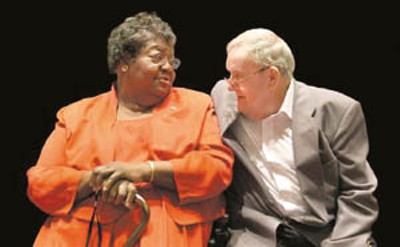 Ellis, who died in 2005, was a Ku Klux Klan leader in Durham, North Carolina, when he met Ann Atwater, a black civil rights activist, at a forum on school desegregation in 1971.

As the Durham Herald-Sun reported on his death:

Mutual suspicion melted into respect during the 10 days of talks, as Mr. Ellis and Ms. Atwater became friends and Mr. Ellis became persuaded that whites, especially the poor, stood to gain from the civil rights movement more than under segregation.
…..
Though she has suffered for years from the effects of diabetes, Ms. Atwater was able to attend Mr. Ellis’ funeral, at which she spoke.

I remain in awe of Ann Atwater. As I wrote then: “How many of us would have whatever rare quality it took to reach out, like she did, to someone representing such a hateful movement?”

Instead, it seems, the default reaction of too many people (including myself sometimes) is to regard people like C.P. Ellis circa 1971 as implacable enemies, to be confronted only across literal or figurative barricades.

Of course not all racists, haters and extremists are capable of such changes of heart– especially those who have convinced themselves “intellectually” of their rightness. And sometimes it’s simply a waste of effort to try and persuade them otherwise.

But, as Ann Atwater proved, sometimes it is worth it.

Does anyone have similar stories?