Venezuela’s Hugo Chavez, on one of his periodic “I ♥ Dictators” tours, has turned up in Belarus to be welcomed by President Alexander Lukashenko. 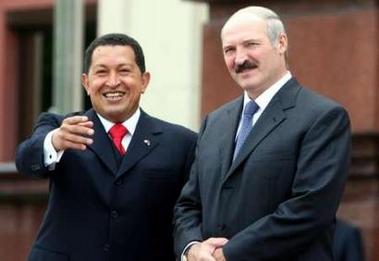 “Here we feel ourselves to be among our brothers,” Chavez said after his arrival at Minsk airport on Sunday at the start of his three-day visit to Belarus.

“We see here a model social state like the one we are beginning to create,” said Chavez, the first Venezuelan leader to visit the former Soviet republic lodged between Poland and Russia on the European Union’s eastern border.

Chavez then flew on to Russia, where he will meet with Vladimir Putin. On arrival in Volgograd, he shouted “Long live Lenin!” Next stop is Tehran to meet an old friend, President Mahmoud Ahmadinejad. 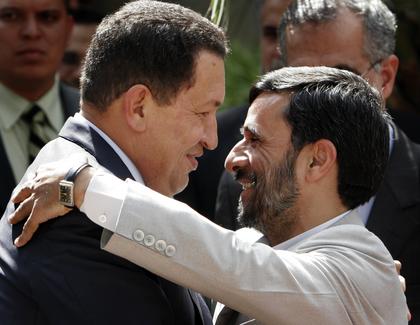 Sadly for those of us who have been following his affectionate meetings over the years with tyrants past and present, a planned visit to see North Korea’s Kim Jong Il has been canceled. I’d have enjoyed reading Chavez’s paean to the Dear Leader.

Update: I’d think even Chavez’s admirers and apologists would have to admit that he’s friendly with an awful lot of creeps. And yes, as I’ve pointed out, so is George Bush (although not with so many, and not with such deep solidarity).