Eric is looking for help in remembering a half remembered sci fi story from his youth.

Which got me thinking about a BBC TV series for children from 1975, just before the news, when I was a kid, called The Changes. That page, oddly, links to a site which is mostly about the Bilderberg Group.

Eric also links to this familiarly themed cartoon from 23 years ago.

The Changes depicted a chaotic, suspicion-govered luddite society which had suddenly turned against technology. The opening sequence featured a man kicking his television set in, I recall: a rather uncommercial thing for the BBC to be encouraging. The series followed a young girl trying to get to grips with the cause of all the entropy. It was terrifying.

The conclusion was, however hopeful:

Mr. Furbelow, the quarry-worker, has unwittingly discovered some sort of sentient lode-stone which had once given magical powers to Merlin, and it is trying to take England back to a better time, before the Industrial Revolution, where people were more at one with their surroundings and each other. Nicky shows it the error of its ways [shame], that it is doing more damage than good, and asks that things be returned to normal. There is an explosion, the cavern is buried once more, and suddenly the roads are filled with cars again – The Changes are over. 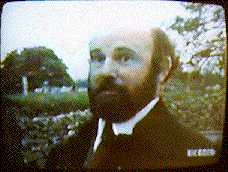 wav file of the theme tune, as well as a real player version. They do, however, warn you that linking to the latter file may expose you to a risk of spyware.