Here’s a transcript of Ken Livingstone’s bizarre outburst to the journalist, Oliver Finegold:

Livingstone: How awful for you. Have you thought of having treatment?

Finegold: How did tonight go?

Mr Livingstone: Have you thought of having treatment?

Finegold: Was it a good party? What does it mean for you?

Mr Livingstone: What did you do before? Were you a German war criminal?

Finegold: No, I’m Jewish, I wasn’t a German war criminal and I’m actually quite offended by that. So, how did tonight go?

Mr Livingstone: Arr right, well you might be [Jewish], but actually you are just like a concentration camp guard, you are just doing it because you are paid to, aren’t you?

Finegold: Great, I have you on record for that. So, how was tonight?

Mr Livingstone: It’s nothing to do with you because your paper is a load of scumbags and reactionary bigots.

Finegold: I’m a journalist and I’m doing my job. I’m only asking for a comment.

Mr Livingstone: Well, work for a paper that doesn’t have a record of supporting fascism. 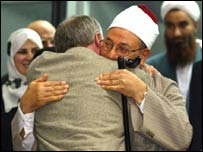 Very often those who raise uncomfortable truths are denounced by those who would rather not consider them.