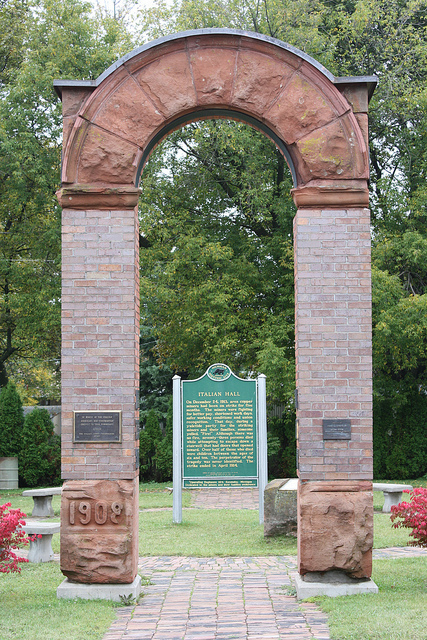 I hope it isn’t inappropriate to note that tomorrow is the 90th anniversary of the awful event that took the lives of more than 70 striking copper miners and members of their families in Calumet, Michigan.

For those unfamiliar with this piece of American labor history, or with Woody Guthrie’s wrenching song about it, the story is briefly told here:

While the miners’ families were celebrating Christmas Eve at Italian Hall in Calumet someone yelled, “Fire!” In panic, the crowd rushed to get out of the second-floor hall. They could not open the door to the outside, and 73 people–mostly children–died in the crush.There was no fire. Many miners believed that the mine companies had sent the person who caused the panic, although this could never proved it seems the most likely explaination. Eye witnesses saw company agents in the area but could not identify them. The crime remains unsolved.

Whether this is the most likely explanation I can’t say. Obviously a lot of people thought so, including (not surprisingly) Woody Guthrie. As a historian has noted, the dispute over what happened in Calumet on Christmas Eve 1913 is itself part of the ongoing struggle between management and labor.

The Italian Hall was torn down in 1984, and Michigan labor unions used the remains of the building to construct a memorial to the victims (see above).

Guthrie’s song, “1913 Massacre,” tore me up the first time I listened to it. It still moves me. “1913 Massacre” has since been performed by Arlo Guthrie, Ramblin Jack Elliot, Scottish folksinger Alex Campbell, and Bob Dylan.