Personal thoughts on the demise of the Queen by Muncii92 :

The Queen is dead, and the nation mourns as  do millions in countries world wide. The longest reigning Monarch, the Queen presided over a period of immense change, yet managed to create a sense of continuity. She personified the very British ethos of  ‘Keep calm and carry on’.

And the heavens even presented us with rainbows over royal palaces when her death was announced. 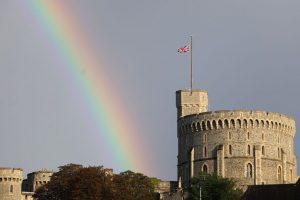 Eulogies have noted her steadfast commitment to what are often described as ‘old fashioned’ virtues: stoicism, patriotism, duty, tradition, continuity, and self- containment — the famous British stiff upper lip, a rarity in these days of narcissism and emotional incontinence. During her annual Christmas messages to the nation, she sometimes referred, tangentially,  to family and royal household issues, but generally the Queen didn’t really do ‘sharing’. This is a global icon who has not granted a single interview in her life.

As Tom Slater of Spikedonline  – a thoroughly republican outfit – put it ‘she was the Queen, yet somehow, it wasn’t all about her ‘.

And it never was.

‘It is an extraordinary statistic that more than half the nations on earth today did not exist in their present form when she came to the throne. In Britain, we had long been so used to this utterly dependable constant in all our lives that we had almost come to take her for granted. Elsewhere, however,  Queen Elizabeth11 represented stability on a staggering, enviable scale.  Her coronation would predate their constitutions, their national anthems, their flags and their currencies. She was history made flesh…she would reign through the Cold War, the Falklands War, two Gulf Wars, the ‘war on terror’ and Vladimir Putin’s invasion of Ukraine…’

Jordan Peterson, in a sombre commentary, opined that of all the countries with a constitutional monarchy, Great Britain does it the best.  The fact that Prime Ministers must meet with, and answer to, the Monarch, is, according to Peterson, a great strength and source of stability.  Nobody really knows what went on during the regular meetings between Queen Elizabeth and the sitting Prime Minister.  There has been speculation, of course, not least as imagined in the drama series The Crown.  No doubt she had her favourites and preferences, which she never shared. She would have received – and asked questions of – them all with grace and equanimity.  Whilst appearing to be ‘above politics’ – a fact which endeared her to many people  – she would nevertheless have seen it as her duty to appraise herself of the most important political problems of the day.  The famous Red Boxes even followed her up to Balmoral, where she was officially on holiday.

Her Majesty met 15 British Prime Ministers, and she inaugurated the most recent only a few days ago at Balmoral.  Pictures of her receiving Liz Truss, the new Conservative Prime Minister on 6th September, showed Her Majesty looking physically frail but wearing a big smile. Duty until the end.

During her long reign, The Queen met hundreds of foreign leaders and dignitaries, among whom were plenty of despots, rogues, chancers and weirdos, but she did it all with her customary charm, never giving an opinion about any of them.

I watched on TV the service of remembrance  at St Paul’s cathedral on 9 September. It was astonishing in so many ways. The cathedral is, of course, special – no wonder Churchill, during the Blitz, told the firefighters to save St Paul’s at any cost. And they did.  The interior is magnificent. The congregation comprised nearly 2000 ‘ordinary’ members of the public, in addition to MPs and statesmen and women.

The public came on a ‘first come first serve’ basis, having queued outside for hours.  Most, it appeared, did not ‘dress up’ for the occasion; there were plenty of young people, and I saw a few mothers with babies and young children. This ‘normality’ added to the significance and sincerity of the occasion. Some people cried.  They listened attentively to the sermons.

Towards the end of the service, a piper in full highland dress piped a lament whilst walking the full length of the cathedral. It was spine-tingling.

I’ve suggested before at HP that in times of great national mourning, and at great national ceremonies, many British people, including me,  suddenly remember they are Christian even though most of the time, it doesn’t occur to them. This was a good example.  The service was determinedly Christian, formal, dignified, and there was nothing multi-faith about the occasion. Everybody was there to honour the Queen in the context of the Christian faith, in an enormously significant and historic place of worship. I’m sure Her Majesty would have approved.