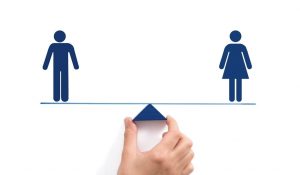 I’ve been thinking a lot about equity these days, and not only the equity that is part of the “diversity, equity and inclusion” mantra the woke brigade is so enamored of.  That equity is the end goal for Black Lives Matter activists such as Ibram X. Kendi and Kehinde Andrews. It means “equality of outcome,” and posits that there’s only one reason why group outcomes aren’t equal: racism.

Equity, he says, is an entirely different ballgame: “Equity is …is based on the idea that the only certain measure of “equality” is outcome—educational, social, and occupational. The equity-pushers axiomatically assume that if all positions at every level of hierarchy in every organization are not occupied by a proportion of the population that is precisely equivalent to that proportion in the general population that systematic prejudice (racism, sexism, homophobia, etc.) must be at play.”

In other words, the equity-seekers blame bigotry – in one form or another –for inequities of outcome among racial groups and genders. This reductive and simplistic notion ignores any other reason for differences in outcomes among groups, such as cultural differences between ethnic groups. Nor does it take into account that men and women might have different interests and therefore, may tend to gravitate to occupations with different pay scales.

And that is my segue into the second “equity” – pay equity — which admittedly is related to the first. My particular interest in pay equity stems from my time working as an editor in a Canadian social welfare agency, which was by definition quite left-of-centre, as was I at the time. Like the equity of outcomes, pay equity sounds nice and fair on its face. Shouldn’t people be paid equitably and fairly?

But pay equity is not equal pay for equal work, a notion that, like equality of opportunity, no reasonable person could or should oppose. No, pay equity translates to “equal pay for work of equal value.” When this idea began to be floated in the mid-1980s in Canada, I intuitively opposed it. Who would decide what would constitute “equal value” between, say, a secretary (female dominated profession) and a custodian (male dominated). Or a parole officer (male dominated) and a social worker (female dominated). I shuddered when I thought about the people working in my agency making decisions like that, for I knew such decisions would axiomatically only favour women. It was my first dissent from the orthodoxies of the not-so-far left in Canada, as it seemed to me the job market (and, in the case of unionized work, collective bargaining) were the only workable ways to determine wages.

The issue seemed to go away, in the Canadian context at least, and I thought this very dangerous idea  had been discarded. As it turns out, I was quite wrong. The idea had lain dormant for 30 years, but was revived by Justin Trudeau’s government,which passed a “pay equity” law in 2018 that became effective on August 31, 2021.

The stated purpose of the law “is to achieve pay equity through proactive means by redressing the systemic gender-based discrimination in the compensation practices and systems of employers that is experienced by employees who occupy positions in predominantly female job classes so that they receive equal compensation for work of equal value.”

The Canadian Human Rights Commission, which has an enforcement role regarding the Pay Equity Act, says that “’Equal pay for work of equal value’ is like comparing apples to oranges – They are different, but equally nutritious. For example, comparing the value of a truck mechanic job class (commonly held by men) to that of an account technician job class (commonly held by women).

Leaving aside the nonsensical claim that apples and oranges are “equally nutritious” – they aren’t – it’s noteworthy that the Act specifically will not work the other way; that is, if a male dominated job is found to pay less than a female dominated job, no redress is required. Also noteworthy is that the Act will apply to 4500 federally regulated employers, but not to indigenous employers.

Meanwhile, employers for whom the Act does apply will have to:

Although the implementation of this bureaucratic boondoggle will surely swell the ranks of human resources departments, one has to wonder how salaries of jobs determined to be “of equal value” but with significantly different levels of recruitment (e.g. child care workers and binmen) will be calculated. Will market forces be ignored altogether? It would seem so.

Supply and demand is so 20th century.