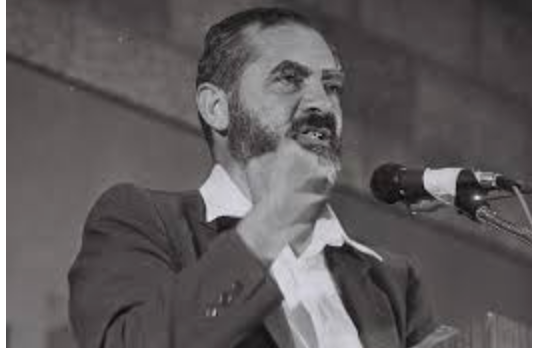 I clicked a link to a Times of Israel article and in a second after reading the headline my anger soared.

The article in question can be found here.

The successor to the National Religious Party Jewish Home sold its soul and has tarnished the brand of religious Zionism by jumping in to bed with Otzma Yehudit, the racist successor party to the banned party of the late Rabbi Meir Kahane.  It did this through agreeing to a pre-election alliance with this Kahanist group.

What does all this have to do with Benjamin Netanyahu, the Israeli Prime Minister, you may fairly ask?

Netanyahu whose sole value nowadays seems to be keeping Netanyahu in power at all costs was desperate for the vote share of the right not to be decreased. If this happened it could decrease his chances of becoming Prime Minister again and increase the chances of him being jailed for numerous corruption charges. So Netanyahu ran a highly personal campaign of phone calls, a wide array of soul-selling deals, face to face meetings, the promises of the holy grail of Ministerial positions for Jewish home leader ex IDF Chief Rabbi, Raffi Peretz, who initially was sceptical of an alliance. This was all so important to Netanyahu he cancelled a meeting with his fellow authoritarian Vladmir Putin. Netanyahu got the partnership between Jewish Home and Otzma Yehudit and Israeli politics became even uglier.

Likud used to be a Classical Liberal Party, who opposed racism, theocracy and harming individual freedom. I am currently reading a biography of  Ze’ev Jabotinksy and what shines through it is that he was a true democrat. Jabotinsky and Menachem Begin must be turning in their graves, whilst the last of the democratic Likud tradition represented by Benny Begin and Reuven Rivlin must feel awful. Its not a new thing. Under Netanyahu’s leadership Likud has set itself up against the Supreme Court, tacitly look to legalise outposts and introduced the Nation State Bill, which was the equivalent of sticking two fingers up to the Israeli Arab community. Nor will I forget how in the last election, in a bid to get votes on the eve of the election, Netanyahu called for Jewish people to vote as the Arabs were coming out to vote in droves.

Israel’s Prime Minister, Benjamin Netanyahu is now a threat to Israel’s moral fabric. He is going against the Israeli Declaration of Independence. As pointed out by the New Israel Fund the declaration states that Israel is both the homeland of the Jewish people and a democracy that confers equal rights on all its citizens. I think all Israeli Prime Ministers should seek to uphold the values set out in the declaration. Clearly Netanyahu does not, given he just gave a green light to Kahanists who envisage an Israel, which theocratically would have more in common with Saudi Arabia and Iran.

Kahanism is a racist, extremist, hate inspired ideology, which seeks to bring about a Jewish Theocracy and distort Judaism for violent ends.

This is the ideology which in 1994 inspired Baruch Goldstein to walk in to the Mosque part of the Tomb of the Patriarchs and with a gun murder 29 Palestinians.

This is the ideology which acted as the motivation for Yigal Amir on one night in Tel Aviv to murder Yitzhak Rabin.

This is the ideology that inspires Lehava, who seek through threats and violence to bring about a Jewish theocracy, stop marriages between Jews and Arabs, whilst attempting to run out of their version of Israel gays and Israeli Arabs.

This is the ideology which was key to the Jewish Underground terrorist movement of the 1980s who tried to blow up the Al Aqsa Mosque in Jerusalem.

I know the true face of Kahanism, as I have had the misfortune of meeting one of its leading proponents. His name? Baruch Marzel. Guess what –  he is running to become an Otzma Yehudit MK.

I remember the moment as if it was yesterday, when one of the group I was with knocked on his door in Hebron.

(You can get a flavour of Baruch Marzel’s interesting approach to politics from one of his election videos (unofficial.  It shows how Marzel is a bully, racist and thinks nothing of starting a mass brawl to sate his hatred of Palestinians.)

He shortly afterwards came out, looking like a benign, slightly racist uncle. Then I remembered this is a man who idolises Baruch Goldstein and sees him as a martyr. His love of Goldstein is such that he annually holds a party on the anniversary of his death. To me that’s the action of a violent, racist inciter of terrorism.

I tried not to let my mind get polluted by the hate filled invective coming out of his mouth, but there are a couple of sentences he said towards the end of his speech that will haunt me forever. It also gave me a direct insight in to the essence of Kahanism.

Marzel decided he wanted to show the group that despite his image problem, in reality he was a cuddly humanitarian. The problem is that Marzel’s own brand of humanitarianism bears little trace of humanity.

Without remorse and almost joyfully in his New York accent he proudly presented the Baruch Marzel plan for peace in the Middle East.

He said the following

“But I am not an extremist, I only want to expel all the Arabs (He refused to call them Palestinians).”

He was now about to deliver a sickening punchline:

“In the Torah it says we should exterminate all of our enemies.”

I wanted to confront him, but then remembered the old city of Hebron is one of the most tension filled places on earth. So, I kept my mouth shut, even though every fibre of my body was screaming.

These are not just words from Marzel and his fellow Kahanists. They try to act on these words every day.

This is what Netanyahu in trying to maintain his grip on power, has given his stamp of approval for, and now incredibly disturbingly it is finding a path to Israel’s political mainstream.

It beggars belief that nearly 24 years after the murder of Yitzhak Rabin, not only has an Israeli Prime Minister allowed this to happen, the Prime Minister has been crucial to it happening.

Netanyahu is destroying the Israel I love, debasing Zionism and I hope he is stopped by being thrown out at the ballot box.