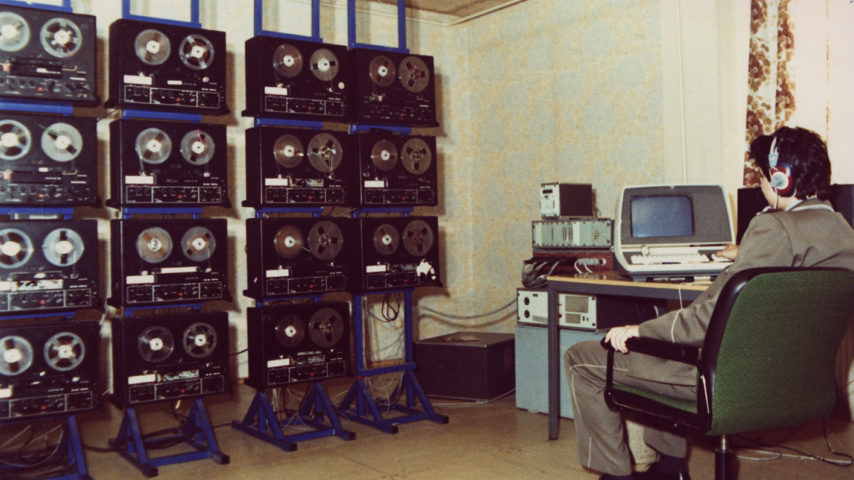 Following from my piece last week in which I complained about the growing trend of people being contacted by law-enforcement officers (or to put it another way “The Police”) after they’d expressed opinions of one sort or another – as they are legally entitled to do in a free and democratic country – online via their blogs or social media, I feel it is necessary to write about this topic again because there’s been another incident. 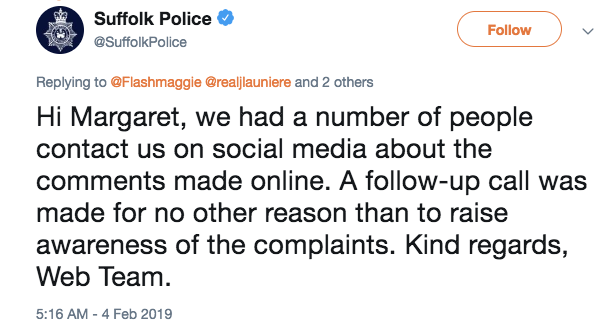 For the full background read the twitter thread belonging to Margaret Nelson, the woman whose morning was interrupted by the Thought Police. Actually, calling them “the thought police” diminishes the severity and urgency of this issue for these are not some self-appointed committee tasked themselves with interfering in online discourse. No, these are the real police. These are uniformed officers of The Crown with the full powers of arrest and the monopoly on force, neither of which – thankfully- they have opted to use so far.

They can’t arrest people because no crime has been committed, but this does not stop them from knocking on doors and ringing people at home and at work to chat and chastise following an incident of non-criminal speech which has caused ‘offence’. During these calls, the ‘offenders’ are typically urged to remove their blog posts or tweets, or whatever form their offensive thoughts were expressed in.

They’re keen to stress to to the people they contact that they have not broken the law. But here’s the thing: The police do not have the right to make public policy – that is for parliament. Their duty is to enforce the law as made by our elected representatives. That is democracy. That is democratic policing.

If they believe their mandate exceeds enforcing the law, who mandated it?

The United Kingdom has always prided itself on the idea of “Policing By Consent”. Explained on the UK Government website, it is, succinctly, for those not familiar with the concept:

“[A] philosophy of policing … derived not from fear but almost exclusively from public co-operation with the police, induced by them designedly by behaviour which secures and maintains for them the approval, respect and affection of the public’… [T]he power of the police [comes] from the common consent of the public, as opposed to the power of the state.”

The question the British police need to ask themselves before they lose the respect and affection – or indeed the co-operation – of the public is: Who consented to this police behavior?

If a police officer knocked on one’s door with a ‘complaint’ about something one had written on a blog or on social media and conceded it did not break the law, one should (and probably does) have the right to tell them, politely, to leave one in peace. They have no right to interrupt the peaceful enjoyment of one’s day except where they believe a crime has been committed and where one is involved in said crime.

What’s more, one should have the right to sue to police under the Data Protection Act if they retain one’s name on any official record not pertaining to the investigation of a crime. If this is nt the case, it ought to be an urgent civil liberties issue.

The trouble is, making a fuss will provide the police with an incentive to either (1) seek to have online speech come under their remit, or (2) to find creative interpretations of existing law to actually charge people with something so they can continue with the practice of policing thought and expression – a practice they appear to enjoy, have taken up with self-righteous zeal, and which they show every sign of getting comfortable with.

People who value freedom of thought and expression in a modern liberal democracy really out to write to their MPs so something is done about this obvious mission creep. The police are seizing powers they don’t have, and they must be stopped. In addition, someone ought to put in a freedom of info request and find out how much it costs the police to process and follow up on a Twitter non-crime.

But most importantly, a free society must make it very clear we never consented to be policed in this way.