On 20 July, David Cameron delivered a speech in Birmingham on British Islamism, understood to have been written with substantial input from Maajid Nawaz and the counter-extremism organisation, Quilliam.

This raised hackles at the Guardian, some of whose editorial staff appear to be laboring under the misapprehension that Islamist organisations like Hizb ut-Tahrir are basically harmless and misunderstood manifestations of understandable Muslim protest and grievance occasioned by Zionism, Islamophobia, neo-con neo-imperialism, neo-liberalism and all the rest of it.

Why would Iqbal take the precaution of protecting her tweet from searchability by asterisking Nawaz’s first name and misspelling his second? Well, probably because the very next day she sent Quilliam the following email:

Good to speak. As discussed, we’d like to submit a bid to interview Maajid Nawaaz in the paper’s most prestigious and popularly read slot: the G2 Monday cover interview. This is where we feature leading politicians, arts and cultural icons and public figures making an impact on the news agenda that week

Given Maajid’s consistently dedicated work to combat extremism and the increased public awareness around Quilliam Foundation following the PM’s speech yesterday, would be great to build on that momentum and flag up the crucial work being done behind the scenes.

As per, the G2 cover requires exclusivity to make it work — it is a major piece, running over 4-5 pages at 2,500 words — and we would need all media appearances, comment or interview from/with Maajid to be completely restricted until our piece runs on Monday 27th July i.e he wouldn’t be able to talk to any press bar our journalist this week!

Great if you could let me know either way today. We would need two hours of his time for the photographer and journalist tomorrow; Monday‘s edition goes to print on Friday afternoon.

Look forward to hearing from you.

The resulting profile of Nawaz, written by David Shariatmadari, finally appeared on the Guardian’s website at 7pm on Sunday August 4. And, as character assassination jobs go, it was a doozy.

Take this, for example:

Nawaz’s powers of verbal persuasion are something even his detractors concede. There’s a strong line to take in every answer. But equally, there’s very little sense of being open to persuasion himself. Perhaps this is the Hizb-ut-Tahrir training at work, a training he says involved sitting in meetings “concocting rebuttals as defensive mechanisms”.

Shariatmadari digs up and parades a handful of people willing to badmouth Nawaz, but only if their anonymity can be protected. (From whom? Or what? And why?)

A former acquaintance of Nawaz, who also asked for anonymity, points to something more personal. “If you talk to people who went to school with him, they all say the same thing: they say it’s not about the mission or the cause, it’s about the man. I don’t think Maajid believes anything. I think he’s basically a man who says: what is my cause and what is going to get me the most attention, the most publicity?”

Only Paul Goodman, editor of Conservative Home, is brought forward to offer a word in defence of Nawaz. Either Shariatmadari didn’t bother to interview Nawaz’s numerous liberal and leftist supporters or, more likely, he felt that such contributions might interfere with the impression that these people do not exist. Even Nawaz’s coffee was felt to merit a petty, thinly-disguised anti-elitist sneer. And of course, the incident in the strip club was dragged out again for the prurient entertainment of Nawaz’s many and various enemies. All rather tawdry, depressing, and disgraceful.

Nawaz posted a response to the article on Facebook, identifying a number of distortions and omissions. To take but one example:

“Perhaps this is the Hizb-ut-Tahrir training at work, a training he says involved sitting in meetings “concocting rebuttals as defensive mechanisms’.”

This quote came in relation to my reflection of how Dr Abdul Wahid – the UK front-leader of extremist group HT – used to sit with me to do this in preparation to defend our Islamist extremism in media interviews back when I was still a member of HT. I deployed this quote in protest at your newspapers very soft puff-piece profiling Abdul Wahid by Peter Oborne, which allowed Abdul Wahid to get away lightly using his pre-prepared answers. How ironic you used my same quote, out of that context, against me without citing this context in which I used it.

It is indeed interesting to compare and contrast Shariatmadari’s dismal hatchet job of a former Hizb ut-Tahrir member turned secular liberal and counter-extremist with Oborne’s excessively indulgent profile of Wahid, chairman of the executive committee of the of HT’s UK branch. “I have known Wahid for around a decade, ever since the time of the Iraq invasion. We have dinner occasionally” Oborne chirped, before going on to reveal:

As well as his role at HT, he’s a GP. Today the weather is warm and he answers the door in a safari suit. He bought it, he says, on a recent pilgrimage to Saudi Arabia. (Later, he emails to specify that it’s from Medina, explaining “Saudi is an entity that was conceived in the Foreign Office, not in Islam”.) His front room is a very ordinary environment for a man who leads an organisation so frequently accused of bigotry and worse.
[…]
So, then: what does it feel like to be singled out by the government as an extremist? “Extremist,” says Wahid, “is the secular word for heretic. It means that you don’t subscribe to certain political and social norms.” Blair and Cameron, he adds, “suffer from the disease of populism. Blair felt like after 7/7 he had to do something, and Cameron…”

…and the article continues in this vapid vein for some 2,500-odd words, with Oborne dutifully jotting down Wahid’s various evasions and grotesque forays into moral equivalence in the manner of a credulous pupil. It would be comical if only it weren’t so serious.

Quilliam were, understandably, aggrieved (although, frankly, they probably should have been known better given the Guardian’s generally wretched form on this stuff). Quilliam’s managing director Haras Rafiq confronted Iqbal on twitter and asked her how she could reconcile the unctuous tone of her email requesting an interview with the vindictive and dishonest article that resulted once that request had been honoured in good faith. She was unfazed: 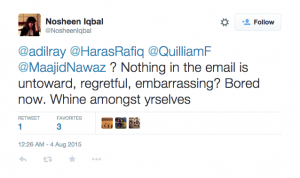 Well, so long as you’re not prone to embarrassment when presented with clear evidence of your own mendacity and lack of integrity.

In the comment section below Shariatmadari’s article, a commenter with the username apfrancis pointed out that Shariatmadari’s use of anonymous sources appeared to contravene the Guardian’s own editorial guidelines. His post in full read:

This quote seems to be in clear breach of the Guardian’s published editorial guidelines on anonymous sources:

“A former acquaintance of Nawaz, who also asked for anonymity, points to something more personal. “If you talk to people who went to school with him, they all say the same thing: they say it’s not about the mission or the cause, it’s about the man. I don’t think Maajid believes anything. I think he’s basically a man who says: what is my cause and what is going to get me the most attention, the most publicity?”’

The Guardian has been open about their standards on anonymous sources many times, including here:

“The use of anonymous quotes is widespread within newspapers and is, I think, particularly insidious when used to snipe at public figures in profiles.”

The other two anonymous sources used in the article also seem to be in breech of the code:

“I am taken aback by the anger with which one senior LibDem, who asked to remain anonymous, railed against Nawaz and Quilliam’s high profile. ‘They’re not effective. I don’t know quite who they’re influencing – certainly not people in the Muslim community. The problem is the connections they have – with [rightwing thinktank] the Henry Jackson Society and [former leader of the English Defence League] Tommy Robinson. I think you should be looking at organisations and people that are doing the hard graft on the ground, trying to steer kids away from being groomed. That isn’t a thinktank based in an expensive property in Bloomsbury, frankly.'”

“As one Muslim woman tells me: ‘People who’ve never been attracted by that ideology don’t need to be lectured by someone who was.'”

Can an editor at the Guardian please respond as to why these anonymous pejorative quotes were allowed to be published when they clearly violate the Guardian’s previously published guidelines on the issue? This piece is already generating controversy for it’s alleged bias against Nawaz and the anonymous quotes really aren’t helping the Guardian to maintain the appearance of impartiality. I would like an explanation on this issue, please.

Tiring of defending the article on twitter, Iqbal became tetchy and informed Rafiq and Nawaz that if they were unhappy they could file an official complaint with the Guardian’s Reader’s Editor. Hopefully, they will do exactly that.