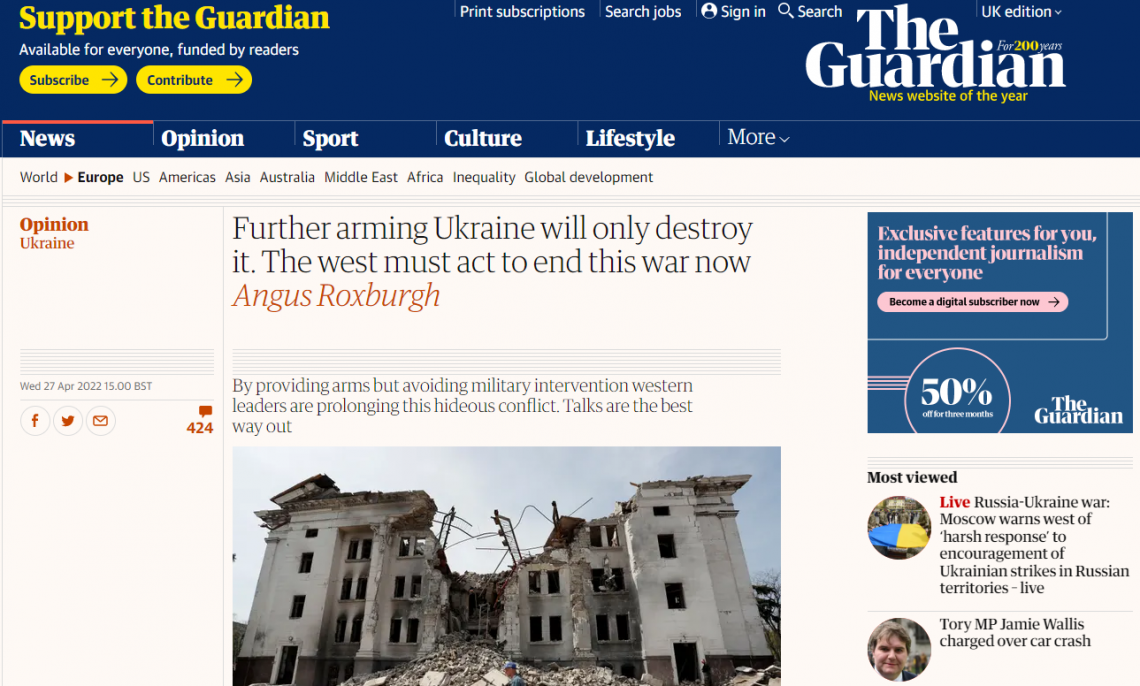 “Angus Roxburgh,” says his bio at The Guardian, “is a former BBC Moscow correspondent and former consultant to the Kremlin. He is the author of The Strongman: Vladimir Putin and the Struggle for Russia and Moscow Calling: Memoirs of a Foreign Correspondent.”

Putin’s biographer? Once a consultant to the Kremlin? I know it is hard to spot a red flag in Moscow, but c’mon!

I confess, this was my initial reaction when I checked who had written the bold statement before me which seemed to be a stark and chilling warning to the Ukrainian defenders and their backers in the Democratic West: ‘Surrender or Die’.

“Of course you can’t say that in a British newspaper, so you have to dress it up a bit,” I muttered. And typically The Grauniad would print it. After all, they once published an op-ed by Osama Bin Laden!

This is what he said:

“By providing arms but avoiding military intervention western leaders are prolonging this hideous conflict. Talks are the best way out”

I had read similar comments by appeasers of Putin on Twitter over the past month.

“This was not buried in the body copy. No, this was the actual blurb below the headline. Have they no shame?” I asked, bile rising in my throat.

But then I read further.

Roxburgh says, and this may be stating the obvious:

“The longer this war rages on, the more Ukrainians will flee their homeland, and the more devastation will be wrought upon their homes, cities, industry and economy. Yet the west’s current approach of supporting Ukraine’s war aim of defeating the aggressor, and providing arms for that purpose while pointedly avoiding direct military intervention, is guaranteed to prolong the war. Russia’s progress may be slowed, but it’s highly unlikely to be stopped, far less pushed out of Ukraine, and in the meantime the grinding destruction and hideous war crimes will continue.”

But then comes the cruncher:

“Surely, if the lives of Ukrainian people are our concern then the west has to do something to stop the war – now. Encouraging the Ukrainians to continue, however just their cause, is merely making their country uninhabitable.

“The trouble is, there are only two ways to stop the war quickly, and neither is palatable to most western leaders.

“One would be for Nato to enter the war and make a quick, massive and decisive strike to cripple Russia’s invasion forces. Unlike with Russia’s actions, it would have every right under international law to do so. “

The other, I’m sure you can guess, is to get Putin to the table. But everyone knows this is impossible. As I have been saying here for some time, Putin has gone too far and invested too much to retreat now.  Roxburgh makes the same point, and of course he’s right.

Upon re-reading the piece several time, I have concluded that my original gut instinct was correct. I think Roxburgh is shilling for Moscow and The Guardian is giving him the space to do so. He is setting up a very sophisticated rhetorical bait-and-switch in which he hope we will conclude that “talks are the only way out”, knowing that these talks will inevitably mean Ukraine has to cede significant territory to Russia in return for getting them to leave. It is like advising a woman to “just obey her abusive husband” if she wants the regular beatings to stop.

My hope though is that it will backfire and that his setting out a convincing argument that Putin won’t back down is so persuasive that we conclude that NATO intervention is in fact the better of the two scenarios he sketches as alternatives to giving Putin everything he wants until the next nuclear blackmail.