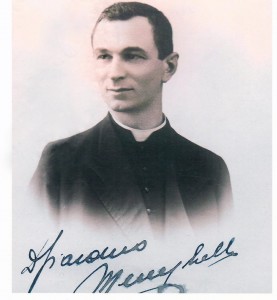 My father has always taught me the importance of remembering the good people who saved his life (and thus mine) during the war.

I am therefore delighted that Monsignor Giacomo Meneghello has been awarded the title “Righteous Among the Nations” by Yad Vashem, Israel’s Holocaust remembrance authority, after my father nominated him.

He arranged for my father and his brother, Vittorio, to be hidden in a convent. They were only 5½  and 2½ years old when they were separated from their parents (who also survived). When the convent was about to be raided by the SS, my grandfather removed them, only to be caught himself by uniformed fascists. He escaped. Monsignor Meneghello arranged for Don Giulio Facibeni to collect and take my father and uncle to one of his orphanages in Montecatini. They stayed in Montecatini until Florence was liberated, and soldiers of the Palestine Brigade Water Company (British army) came to take them back to their parents in Florence.

We can never fully express our gratitude for the acts of humanity and bravery carried out by the ordinary people who risked their own lives to save others in such dark times. Others failed to act, or could not. While I pray that I will never need to do so, I hope that I would follow their example, should I ever have the opportunity, inspired by their ever-lasting gift to my family and my people.

Monsignor Meneghello was a pivotal link in the network which assisted and saved many of the 400 plus Jews helped by the Catholic clergy in Florence. In particular, he was the person who placed all members of my family in hiding refuges in Florence and in Montecatini. More than 20 members of my family lived after this, thanks to the protection of Cesare and Vitti, my father and late uncle, and their parents Simone and Marcella. 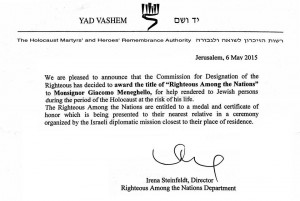