Andy Slaughter is one of Labour’s worst helpers of extremists.

So this news from the Palestinian Forum in Britain (PFB) is no surprise:

The Palestinian Forum in Britain invite to attend the social monthly meeting scheduled for Saturday evening, the 4th of April 2015.

The social gathering will host Labour MP and candidate for the Party Andy Slaughter who will speak about his political platform and the role of Palestinian and Arab communities in the British elections.

PFB invite you to attend this important gathering to support those who always condone the Palestinian rights.

The Palestinian Forum in Britain

The PFB is part of the Hamas UK network.

One way you can see this is by looking at the speakers it invites to its events.

They include no fewer than four foreigners who I understand have been excluded from the UK: Wagdi Ghoneim, Ahmad Nofal, Raed Salah, and Muhammad Musa al-Shareef. This may be an exclusion record for a single Islamist outfit.

In those speakers’ works one finds support for terrorism, including attacks on British troops on duty overseas; vicious antisemitism; calls for apostates from Islam to be killed; cruel misogyny; and more of the known horrors of Islamist extremism.

Mr Slaughter is happily courting the west London hate vote, as is his wont.

Andy Slaughter marching against Israel with Hafiz al-Karmi (to Slaughter’s right) of the PFB last summer. Click to enlarge. 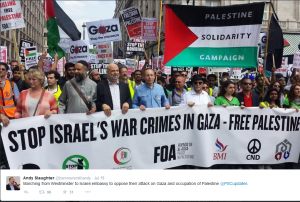