The School of Oriental and African Studies (SOAS) has (or has had) various links with individuals and regimes which might be considered dubious.  Here Student Rights reports on its £755,000 gift from the Saudi royal family and on the inclusion of Yusuf al-Qaradawi on the editorial board of SOAS journal Quranic Studies.  The Guardian reported on its links with Libya, in particular with al-Fateh University, here. This report details a whole string of further gifts and associations.

SOAS also has links with the Hebrew University of Jerusalem (about 12% of whose students are Palestinians/Arab Israelis). 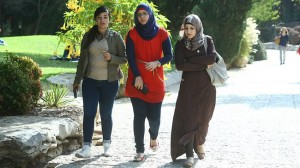 It’s links such as these which supporters of Friday’s vote for a boycott of Israel presumably want to sever – and 73% were in favour of the BDS resolution, just 27% against.  The referendum was open to both academic and support staff as well as students. I understand that it has no binding or legal force, but is obviously a significant symbolic gesture.

Like some others commenting on the result, I think the boycott’s opponents haven’t always used the right arguments. Here’s an extract from the London Student report:

The “No” camp have focused on how a boycott could cut off contact with Israeli academics who speak out over the status quo, the alternative ways in which Israel could be challenged over its actions toward Palestinians and the ways in which the Students’ Union has (they say unfairly) backed the boycott.

I have no problem with Israeli academics who speak out against the status quo or alternative methods of challenging Israel over its policies. But there are more fundamental reasons to oppose an academic boycott – in the context of SOAS I might single out the ‘singling out’ argument.  Here’s part of the Wikipedia entry on the 3D test of antisemitism.

If a person criticizes Israel and only Israel on certain issues, but chooses to ignore similar situations conducted by other countries he is performing a double standard policy against Israel.[8] The implementation of a different moral standard for Jews and Israel compared to the rest of the world, just like the Delegitimization claim, discriminates against a specific group and is labeled as antisemitism. Similar arguments were made by Thomas Freidman, claiming that Boycott, Divestment and Sanctions (BDS) movements that ignore the situation in Syria, Saudi Arabia and Iran are hypocrite and antisemitic.[11] On the same matter, Freidman has also written that the “criticizing Israel is not anti-Semitic, and saying so is vile. But singling out Israel for opprobrium and international sanction – out of all proportion to any other party in the Middle East – is anti-Semitic, and not saying so is dishonest.”

Three panelists argued for an academic boycott and three argued against. However, the latter three didn’t argue against on the basis that a boycott is obviously discriminatory and racist. Instead, they argued that it would merely be “ineffective”.

David Landau, a SOAS student who was one of those on the panel against a boycott, was sincerely concerned that such a boycott could spell the end of Hebrew teaching at SOAS.

Another panelist, a SOAS lecturer against the boycott, confided afterwards that she really didn’t want to be on the panel as she was concerned she would lose the all-important objectivity in the eyes of her students. She felt she had no choice though.

It seems that Dr. Elian Weizman, another SOAS lecturer, had no such concerns about being on the panel. She argued that Israel should be boycotted but, then again, she is a long-standing campaigner against Israel’s existence.

One of the reasons I am opposed to the BDS movement is that it fails to specify exactly what conditions would have to be met for the boycott to be halted.  This might be another example of that ‘motte and bailey’ bait and switch debating technique.  Complaints about settlement expansion or specific injustices against Palestinians are the ‘motte’ – these are arguments that might have some force even with Israel’s supporters. And here, not that you need reminding, is the ‘bailey’, the true end goal for many:

at one point the auditorium went hysterical with approval when a female student announced: “Bashar Assad will go, the Zionist state will go!”

Richard ends his report with a good challenge to the boycotters from the floor:

One of the four Jewish Society members then asked why, in light of the recent judgement that the Palestinian Authority and the PLO were complicit in terrorist attacks inside Israel, SOAS isn’t considering a boycott of Palestinian universities?

This question was a bit too difficult for pro-boycott panelist Amira Nassim, President of the SOAS Palestine Society, who could only respond that the PA was funded by Israel and so nothing more could be expected from them.

It was a great question though.

Here’s a depressing piece which appeared in the JC a few days ago.  Universities’ current preoccupation with ‘safe space’ may seem ridiculous. But the tendency to want to wrap students in cotton wool only serves to highlight the outrageousness of some the techniques employed by anti-Israel activists.

“We are too scared to go anywhere so we walk in a group to the station. People come up to me and say I heard you hate Palestinians,” said the 21-year-old Guatemalan.

And while ‘trigger warnings’ are ubiquitous on the internet – somehow it’s just fine to brandish imitation firearms on campus.