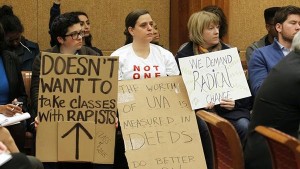 “Rape culture” is a very useful way to describe the idea that rapists are given a social license to operate by people who make excuses for sexual predators and blame the victims for their own rapes.

Marcotte is one of a number of prominent feminists vehemently arguing that America – and the West in general – is presently in the grip of an epidemic of sexual violence, normalised and institutionalised by what they call ‘rape culture’. Such arguments have gained considerable traction in progressive discussion, but they have not done so without meeting resistance from the libertarian Right, and from dissenting voices within feminist circles and the broader Left.

Disputes over whether use of such a sweeping term is justified by actual incidences of rape and sexual assault have focussed on fiercely-contested statistics derived from wildly divergent empirical studies (more of which in a moment), and the murky grey areas regarding what does or does not constitute meaningful consent.

But when Rolling Stone published contributing editor Sabrina Rubin Erdely’s essay “A Rape On Campus” in late November, it ground all debate to a halt. Front-and-centre of Erdely’s sensational article was a story of male sexual sadism, institutional indifference, and innocence defiled, so stark in its moral simplicity, and so devastating in its implications, that it appeared to bulldoze all nuance in its path.

In the autumn of 2012, a beautiful and guileless young University of Virginia (UVA) freshman named ‘Jackie’ was invited to a party at an elite fraternity house by a 3rd year student with whom she worked as a lifeguard. Jackie, we were told, was a “chatty, straight-A achiever from a rural Virginia town . . . initially intimidated by UVA’s aura of preppy success”. She had dressed herself in “a tasteful red dress with a high neckline” and “she wasn’t a drinker”:

“I remember looking at the mirror and putting on mascara and being like, ‘I feel really pretty,’ ” Jackie recalls. “I didn’t know it would be the last time I wouldn’t see an empty shell of a person.”

Upon arrival at the party, Jackie’s naive faith in the goodwill of men allowed her to be lured by her date into a darkened room on the second floor of the fraternity house. Once inside, she was grabbed by unseen hands and thrown through a coffee table. Pinned down on the shards of broken glass and pacified with a blow to the face, she told Erdely that she was then raped by seven men and vaginally assaulted with a beer bottle as jeers and catcalls rang in her ears. Jackie claimed this horrifying ordeal lasted an agonising three hours.

But, nauseating though the specifics of Jackie’s gang-rape were, it was from the implications of her subsequent treatment at the hands of callous friends and colleagues and an indifferent campus administration that the article drew its full impact. As the subheading forewarned, it was when Jackie tried to hold those responsible for her ordeal accountable that “a whole new kind of abuse began”.

Abandoned by her tormentors, Jackie fled the fraternity house past partygoers – not one of whom expressed any concern for her well-being – and, stumbling into the street, she telephoned three friends, begging for help. But when they arrived they displayed a grotesque lack of concern for her distress, instead professing themselves preoccupied by how their involvement might affect their social standing at the college. The counselling and advice she subsequently received from university admin and support groups likewise proved grossly inadequate.

Erdely’s article purported to expose, not just a singularly terrible crime, but also the rotten culture which allowed such acts of sadism to be committed with impunity by the privileged against the vulnerable. The curtain had been pulled back on the hidden squalor of American rape culture, and Erdely was inviting her audience to appraise a fraudulent civilisation unmasked, and daring them to turn away.

Knowing what we know now, it is hard to believe that this narrative – which owes more to the lurid exploitation films of the 1970s than to anything approaching the reality of contemporary American college life – was ever considered remotely credible. That it took nearly a fortnight for serious cracks to appear in Erdely’s story, while uncritical outrage swept through social media like a forest fire, suggests that America is in the grip – not of a culture of rape glorification and apologetics – but, rather, a kind of moral panic.