Last week the United Nations General Assembly voted to declare invalid the farcical Moscow-backed referendum in Crimea to secede from Ukraine and become part of Russia.

The referendum, held under armed Russian occupation, was “approved” by more than 95 percent of the voters– a margin to warm the heart of Bashar al-Assad but not that of anyone who believes in genuine democracy.

Although non-binding, the results of the vote are most interesting (click to enlarge): 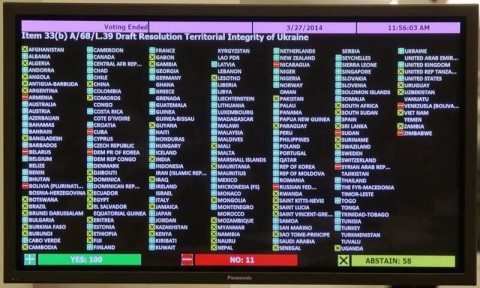 The vote was 100 in favor of the resolution, 11 against and 58 abstentions. Of course not every vote was based solely on the validity of the Crimean referendum. I’m sure many of the countries voting Yes had other reasons for doing so.

Along with Russia, the No votes were pretty much the ones you’d expect:

More disappointing is that Israel did not vote– which put it in the same uncomfortable category as Iran and Turkmenistan.

I understand that Israel has reasons for not wishing to upset Vladimir Putin any more than necessary. But I doubt Israel’s absence from the chamber during the vote will make Putin reconsider his arms shipments to Iran and Syria– any more than have Bibi Netanyahu’s visits to Moscow.

Netanyahu’s admirers often praise his “moral clarity”– a phrase that Bibi himself likes to use. And indeed, when Netanyahu discusses Israel’s historic right to exist and to defend itself, and the double standards applied to the Jewish state, his words are often passionate and powerful and true.

But his unwillingness to publicly condemn Russia’s forcible takeover of Crimea, while “understandable” (I’m starting to hate that word), suggests his moral clarity is selective rather than universal.

Netanyahu is no worse than many world leaders when it comes to moral clarity. But he’s no better either.

Update: Israel may not have voted on the resolution because of a strike by employees of the foreign ministry.

As a result of the strike, no consular services will be available, Israel will not be represented in any international gathering or forum, its ambassadors abroad will not work and services needed for everybody from new immigrants to tourists requiring visas to employers bringing in foreign workers will be brought to a halt.

However the Israeli government notably has not denounced Russia’s aggression in Crimea, and it would be interesting to know how it would have voted.