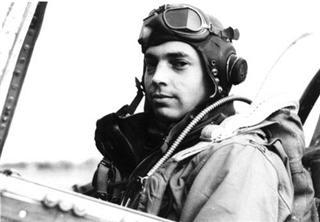 William Overstreet– a native of southwest Virginia who during World War II flew his Mustang fighter plane under the Eiffel Tower in pursuit of a German Messerschmitt (see artist’s depiction) and settled down after the war to work as an accountant in Roanoke– died December 29 at the age of 92.

Although some have expressed skepticism that this happened, French Resistance fighters insisted that they saw it.

One of those French Resistance fighters was the father of Bernard Marie. A French dignitary who has hosted D-Day events every year since 1984, Marie said he met Overstreet in 1994. He knew Overstreet was well-known for his flight underneath the Eiffel Tower but didn’t understand the true importance of Overstreet’s flight until he spoke with his father.

“My father began shouting out me — ‘I have to meet this man,’ ” Marie said.

Members of the French Resistance had seen his flight, and it inspired them, including Marie’s father, he said.

“This guy has done even more than what people are thinking,” Marie said. “He lifted the spirit of the French.”

In the spring of 1944 Bill and his P-51C “Berlin Express” were near Paris… Bill had followed this Bf 109 from the bombers he was escorting when most of the German fighters left. The two planes had been in a running dogfight. The German pilot flew over Paris hoping that the heavy German anti-aircraft artillery would solve his problem and eliminate Overstreet and the “Berlin Express,” though Bill managed to get some hits in at about 1500 feet. The German’s engine was hit, and Bill stayed on his tail braving the intense enemy flak. His desperation undoubtedly growing, the German pilot aimed his plane at the Eiffel Tower and in a surprising maneuver, flew beneath it. Undeterred, Bill followed right behind him, scoring several more hits in the process. The German plane crashed and Bill escaped the heavy flak around Paris by flying low and full throttle over the river until he had cleared the city’s heavy anti-aircraft batteries.

It was just one of several remarkable exploits by Overstreet during the war in Europe. The French ambassador to the US awarded him the Legion of Honor in 2009.

Although it’s possible to admire people who take great risks and do extraordinary things throughout their lives, I think in some ways what Bill Overstreet (and hundreds of thousands of other World War II vets) did was even more remarkable: having done amazing things with incredible bravery for a few years in his youth, he went on to live an utterly conventional and apparently happy life.