iEngage is a group set up in 2008 by former MCB spokesman Inayat Bunglawala and Islam Channel CEO Mohamed Ali Harrath. It says its aim is “to help empower and encourage British Muslims within local communities to be more actively involved in British media and politics”.

In practice, its mission is the protection and promotion of Islamist extremists and the denigration of their opponents.

This Thursday it will stage a rally that perfectly sums up its record and mission. Consider what iEngage calls the “esteemed panel” of speakers: 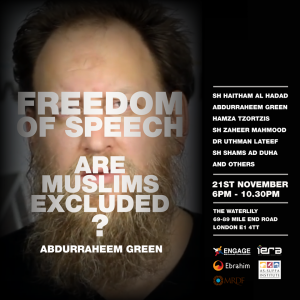 Shakeel Begg is not listed on the poster but he too is scheduled to speak at the rally.

These are people who:

– Tell Muslims at home that they should not co-operate with the police and the security services, endangering national security.

– Salute convicted terrorists as “brothers” or “sisters” and campaign for their release from prison.

– Have records of revolting antisemitism, misogyny, and general contempt for the kuffar.

– Support the death penalty for gays, adulterers and apostates from Islam.

– Mock the very western freedoms they most certainly do enjoy in the UK.

Those are just a few key themes for these extremists. There’s plenty more in the archives of this blog.

In this post, simply take a look at something you may not have seen – Haitham al-Haddad promoting female genital mutilation, which is a crime in this country.

The venue for this rally for extremists will be the Waterlily, a conference centre in East London which has made hosting Islamist meetings a core business.

It gets worse. Apparently Jeremy Corbyn MP will host another iEngage rally in Parliament on 25 November.

Has the Labour party ever called Corbyn on his serial promotion of the worst extremists? Not as far as I know.