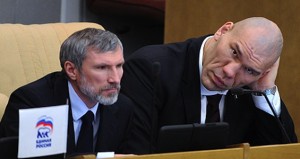 Is Russia’s ‘remove kids from gay parents’ bill the straw that will break Russian anti-gay forces? When will Western media finally report that the Russian version of America’s Christianist anti-gays have Russian opposition?

Last week the news came out that a long hinted at new anti-gay bill had been introduced in Russia’s parliament, the Duma. Deputy Alexei Zhuravlyov’s bill would make sexual orientation a factor in cases when the government is deciding whether to take a child into state custody.

Zhuravlyov (also written as ‘Zhuravlev’) said in an explanatory note to the bill that, according to experts, 5 to 7 percent of Russians have a “nontraditional” sexual orientation and a third of them currently have children. In accompanying supporting documents, Zhuravlyov refers to thefraudulent and debunked paper on gay parents published in 2012 by University of Austin professor Mark Regnerus. And in interviews Zhuravlyov has sounded more or less like a mirror image of the American anti-gay right-wing.

Harvey Fierstein cited the possibility of such a bill in his fiery New York Times editorial, which kick started the movement to boycott the Winter Olympics in Russia. American media has widely covered the move of lesbian journalist Masha Gessen from Moscow to New York with her family, citing the fear that her kids could be taken from her.

What is being ignored is that a wide number of sources think that such a bill is too absurd to pass Russia’s Duma and be signed into law by President Putin.

The Moscow Times described the reaction of Mikhail Fedotov, head of the Kremlin’s human rights council, as “indignation”. It quoted him saying to the BBC’s Russian service:

Will we deprive left-handed people of their driver’s licenses now too? They’re left-handed, you know, and all our vehicles have the steering wheel on the left side, so it’s harder for a left-handed person to drive.

Fedotov told Interfax that if the bill rises ‘to the top of public consciousness’ that would be a ‘disaster, and then we do not know what to do with it’.

The St. Petersburg LGBT organization Coming Out, who were included in the civil society group which met President Obama on Friday, said:

We may derive consolation from the thought that this initiative won’t be approved due to its obvious absurdity, and legal complications in proving the fact of the parent’s homosexuality. After all, deputy Elena Mizulina’s (“Fair Russia”) idea of removing children from homosexual families (initially all children, later adopted only) did not catch on.

(Mizulina is the one who has led the anti-gay activity in the Duma through her committee chairpersonship, and in the media. She has used the state to harass her critics and those who’ve made fun of her.)

The controversial activist Nikolai Alexeyev also thought it was unlikely that Zhuravlyov’s bill would be signed into law. He described it to Interfaxas “absolute nonsense”.

I can’t imagine how this initiative would be accepted in the Duma. I think it’s just the latest populist move to attract attention to a certain individual. Deputies are competing to see who can come up with the most absurd initiative.

I don’t believe that things like this can end up in law and be signed by the president. The president says the rights of homosexuals are not infringed upon, but initiatives like this will create excessive tension between Russia and the West. It’s a provocation against the Russian government.

The idea of Zhuravlyov’s bill as being ‘anti-government’ seems a bit odd, given that Zhuravlyov is a prominent member of Putin’s United Russia party.

But the idea that the bill will not become law does make sense if you perceive Russia as not being a universally anti-gay hellhole. Alexseev’s comment that the bill is a populist, careerist move makes sense if you compare Zhuravlyov’s bill with the antics of Tea Party members in the US Congress, such as them voting to repeal Obamacare – what is it? – 60 times? But you would not judge America solely on the antics of those absurdist US Congresspeople.

Many of these stories would obviously translate to interesting and insightful background for Westerners. Such as that of Ksenia Sobchak, a rich, glamorous ‘it’ girl turned media star and dissident who has 750k followers on Twitter. Sobchak has been one of the main targets of Deputy Mizulina in her at times farcical pursuit of her critics. 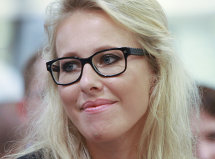 Another one would be the hunky pop star slash actor Sergey Lazarev(450k on Twitter), who says he doesn’t care about rumours that he’s gay and that “I’m always loyal to the people with a different sexual orientation.” 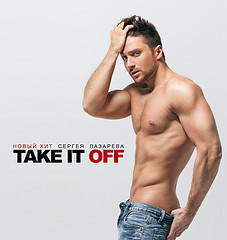 Gay Russia has an story about a prominent economist saying that it is inevitable that the anti-gay laws will be repealed because Russia’s destiny is as part of Europe. Vladislav Inozemtsev said:

Everyday life in Russia today is too European. The same individualistic society, as there. And even more. No big[ger] individualists than Russians.

Inozemtsev suggested a repeal may happen quicker than most would think, ‘within one or two years’, and compared how quickly another civil society set back perceived as irreversible was actually reversed, from Putin appointment to the direct election of regional governors.

One incident highlighted for me how reporting on Russia and The Gays has become seriously skewed and, I would argue, is thus hurting LGBT Russians because it’s hurting Western decision making on how and where to try to help them.

The venerable Russian American journalist Julia Ioffe (who was recently yelled at on air by a MSNBC host because she gave a ‘counterfactual’ answer on Snowden and Putin) wrote for the influential liberal magazine The New Republic ‘Eight Horrific and Uplifting Stories About Being Gay in the New Russia‘. These come from her own life and from Russian media and alongside the skinheads beating up gay and trans teens are friends aiding gay friends. It colourfully demonstrates the mixed, nuanced picture elsewhere absent.

The New Republic’s URL for the story is ‘gay-life-russia-eight-horrific-stories’. The lying page title, what you see in a Google search, is ‘Gay Life in Russia: Eight Horrific Stories | New Republic’.

Seeing an upside to an absurd bill

Moves against gay parents are not just confined to Russia and Russia’s anti-gay laws and rhetoric is being supported and echoed by right-wing forces in several Western countries. Coming Out’s comments could also be said of some parts of America: that the real damage of such a bill is “the fact that such an initiative could be developed and put forth”, that its mere existence amounts to “cruel harassment of LGBT families”.

Thus even though she may well be wrong that the bill will become law and that a real threat does exist to her family (I would like to see someone put that to her), Gessen is understandably playing it safe as a parent because, as Coming Out puts it:

Politicians, endowed with power to guarantee safety and well-being of citizens, chose the most vulnerable social group – minorities with children – as their target.

(Edited to add: G. Rayner points out that “Masha Gessen has some special and unique concerns. Not only is she concerned about the proposed law about taking children away from gay people in Russia, there is the June law passed by the Russian Duma which prohibits gay foreigners from adopting children. Gessen is an American citizen with an adopted child, so, indeed, at least theoretically, she can be affected by this other law.” I would say that as far as I’m aware she has cited what is now Zhuravlyov’s bill rather than the existant adoption law.)

Yet if this bill is a step too far for those anti-gay politicians then a point I made in ‘Some Comment on Russia and the Gays‘ is relevant.

It is also worth noting, as Alexander Kondakov explains at openDemocracy, that the received opinion that Russians are extremely homophobic may not be all it seems. He suggests that actual opinion, based on his reading of polling, shows a population actually much closer to Western opinion – ‘not bothered’, ‘leave them alone’ – than assumed, though due to ignorance and an absence of any information.

(Which reminds me of received opinion about British Muslims when polling shows tolerance: that they may religiously reject homosexuality but support anti-discrimination, that almost all UK Muslim MPs voted for gay marriage.)

So if the laws can become seen as somehow burdensome then maybe those evangelically believing in and prosecuting them can be isolated, as a minority. This is a familiar trajectory in many countries.

If the bill does advance (and especially if he is being asked to sign it) then given Putin’s genuflections on ‘non-discrimination’ is it absurd to think he might publicly denounce it? That, as has happened so many times elsewhere (think of the Briggs initiative against gay teachers in California in the 70s, which Reagan opposed), that Zhuravlyov’s bill might make the choices so stark that a path toward change opens up?

This is happening, recall, whilst the Russian LGBT and allies organised movement is visibly growing. 14+ Russian cities took part in global #Russia4Love protests last week, see more pictures like the one right in this album.

What will Russia do, what will Putin do, if the bill advances and, as Fedotov puts it, ‘we [meaning the Kremlin] do not know what to do with it’. What if, as Inozemtsev suggests, rejecting the evangelical anti-gays does become seen as part of Russia’s economic development, as about becoming more European? What if Novaya Gazeta journalist Elena Kostyuchenko succeeds in collecting evidence in order to ‘out’ gay but anti-gay Deputies, those hypocrites always found at the centre of anti-gay activity the world over, and actually publishes? 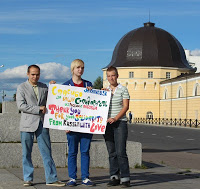 And is it so absurd to think that Coming Out’s wish may come true?

We are convinced that the best evidence of tolerance towards LGBT people today can be a public apology from “United Russia” for debasing LGBT citizens and same-sex families with children with discriminatory statements and legislative initiatives, followed by repeal of such legislation, and further treatment of LGBT as equal in rights and dignity to all citizens of Russia. As is, this is yet one more in the list of legislative proposals that further promote discriminatory and homophobic attitudes in society, paint LGBT as an abnormality and a danger to children, and lead to grave violations of rights of LGBT people in Russia.