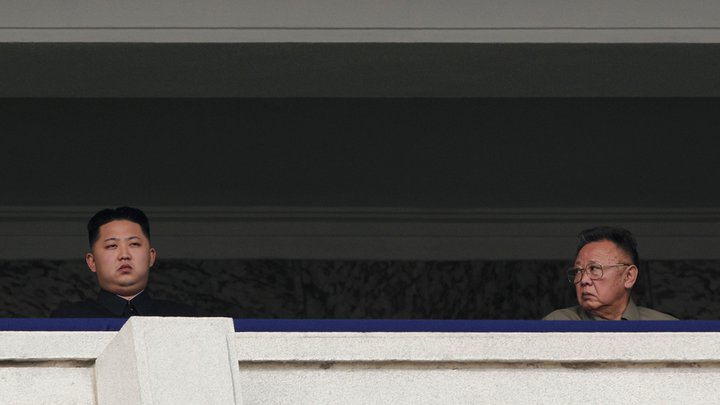 Six months after the Dear Leader became the Eternal Leader and achieved apotheosis, the Young General appears more concerned by dealing with the surplus at State biscuit factories than ensuring adequate food supplies for his people.

Joshua Stanton’s evocation of memories of the Holodomor in relation to micro-famines occuring in North Korea puts me in mind of Christine Ahn’s assessment of starving North Koreans:

I went to North Korea as a peace activist. [Edit: no you didn’t] North Koreans were living in very difficult conditions. Eight-year-old children were loitering around the hotel, shaking because of hunger. Even soldiers were extremely thin.

One thing that surprised me was the mental strength of the North Koreans. I strongly felt their pride and urge to preserve their system.

The publicly stated reason for these famines is prolonged drought conditions (or is it floods?), although even this is not internally consistent as it does not address the ‘failure’ – in the spirit of the NKVD c. 1932 – to transport food supplies from unaffected parts of the country to another.

The underlying reason for this can be divined in whole seconds, as Mick Hartley shows. Namely the Songbun caste system in which all in North Korea are defined at birth to belong to one of three main castes – Core or Wavering or Hostile supporters – which are then sub-divided into 48 further groups: a status which then dictates their access to food supplies and other elementary rights.

Perhaps this reduction of carbon producing units is one of the sales-pitches Pyongyang is making to the UN bodies which deal with allocating carbon credits, as Joshua Stanton also links to. As I discussed last year, Germany-based environmental consultancy group, TÜV Nord was being employed by Pyongyang to secure these credits which each could earn as much as £10 for a regieme which, as Tim Worstall discovered, was unable to secure a letter of credit for £150,000.

Tim Worstall scarpered at that point – with the bemused North Korean reps unable to work-out why he was not as confident in their system as they were – and it is only a matter of time before TÜV Nord is stiched-up like a kipper.