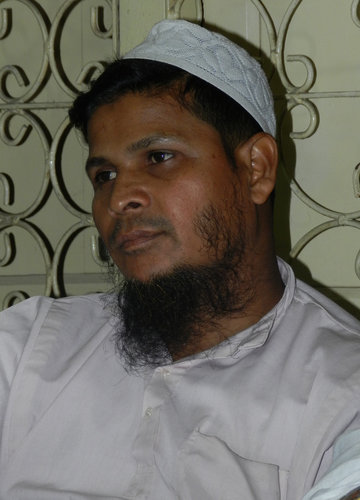 Here in the US, as I’ve reported before, Republicans are doing their best to make it hard-verging-on-impossible for workers to organize unions and bargain collectively in both the public and private sectors.

Republican Gov. Nikki Haley of South Carolina has all but said that she wants to drive organized labor out of her state, proclaiming, “[W]e’ll make the unions understand full well that they are not needed, not wanted, and not welcome in the State of South Carolina.”

However I hope she and other union-haters can spare a thought for Aminul Islam, a labor organizer in Bangladesh who was tortured and killed earlier this month.

“All indications are that Aminul Islam was murdered because of his labor rights work,” said Scott Nova, executive director of the Worker Rights Consortium, an American group working to improve conditions at factories abroad that make clothes for U.S. companies. “This depraved act signals the deterioration of an already grim labor rights situation in Bangladesh, which is now the fourth largest exporter of apparel to the U.S.”

Islam had been serving as a senior organizer for the Bangladeshi Center for Worker Solidarity (BCWS), and had most recently been involved in efforts to organize workers at garment factories owned by a company called the Shanta Group. According to shipping records, the company makes clothing for numerous well-known American companies, including Tommy Hilfiger, Nike, and Ralph Lauren.

Bangladesh is currently the cheapest place in the world for garment manufacturers to make clothing. Workers can make as little as 21 cents an hour, and according to labor organizers, shoddy wiring and locked gates are frequent at Bangladeshi clothing factories despite their highly flammable contents. Over the past five years, nearly 500 workers have died in a series of gruesome fires.
…..
Islam’s body bore signs of brutal torture, according to local police and to a statement issued jointly by two American groups, the Worker Rights Consortium and the International Labor Rights Forum. The release states that labor rights organizations in Bangladesh and the United States believe the killing is associated with Islam’s work on behalf of apparel workers who sew garments for suppliers to major U.S. retailers and brands.

One reason for their suspicions is that Islam had been previously detained and tortured in connection with his efforts on behalf of workers, according to Nova. Two years ago, Islam told his colleagues that he had been detained and beaten by Bangladeshi intelligence officials. He said the officials demanded that he write a letter implicating his colleagues at BCWS in instigating unruly labor protests that damaged some factory buildings. Islam refused, but told colleagues he had managed to escape his captors.

One of those implicated in the protests was Kalpona Akter, the head of BCWS, who told ABC News in a recent interview that she was concerned that her group and others could face intimidation or even jail time if they continued to fight for safer working conditions and better pay in Bangladesh.

In her interview, Akter told ABC News that she was willing to accept the risk involved in fighting for better working conditions.

“I was the worker,” she said. “I have experienced [working] 23 days in a row …I was sleeping in shop floor. I was taking sometime shower in toilets. I was drinking unsafe water. I have been slapped by the supervisor. So I don’t want to see anymore workers go the same way.”

Also note that the interviewer, Brian Ross, says to her, “So you want the same thing that happened in America to happen in Bangladesh.”

Let’s hope that when it comes to the right to organize freely and without intimidation, Bangladeshi workers can do better than American workers are doing now.

According to the International Trade Union Confederation, 90 trade unionists were murdered worldwide in 2010 (most in Colombia), as well as thousands more arrested and fired.