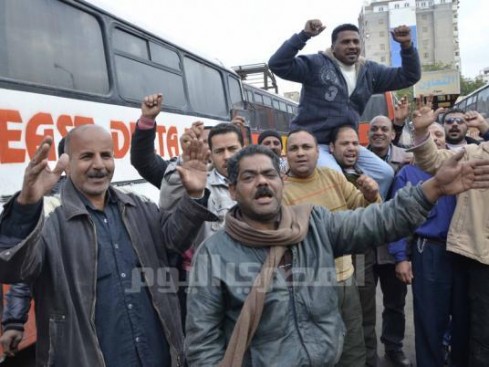 While the independent trade union movement has flourished over the past year, the Supreme Council of the Armed Forces [SCAF] has taken a harsh line toward organized labor, criminalizing strikes and work stoppages, and arresting protesting workers and labor activists.

But the military rulers are also trying another tactic when it comes to limiting the workers’ rights movement: using their own labor force and resources to undermine strikes.

The most recent act of strike-breaking has been the Egyptian army’s operation of buses from 25 February to 5 March during a nationwide strike at the Delta Bus Company.

More than 1,500 workers employed at the Delta Bus Company violated the anti-strike law, arguing their strikes aim to improve — not harm — the national economy.

The strike began on 23 February in the Suez Canal cities when hundreds of workers at the branches of the East Delta Bus Company escalated their protests into work stoppages.

Workers demanded improved wages, affiliation to the Transporation Ministry rather than the Holding Company for Transportation, independent trade unions, spare parts and proper maintenance of buses, along with the removal of corrupt administrative officials from the company.
…..
Nabil Hamam, a bus driver from East Delta Bus Company’s branch in Port Said, said the army operated its fleet of buses “servicing cities east of the Nile Delta under the pretext of keeping commuters from being stranded and protesting. However, they should’ve taken into consideration the reasoning behind our strike. We strike not only for our interests, but for the interest of the commuters — for the sake of improving our company, and improving state-owned transport services,” said Hamam, who earns LE300 per month, though he has been working at the East Delta Bus Company for seven years.

“The SCAF has moved to counter our strike, while the [Muslim] Brotherhood and Salafi MPs who we voted for in Port Said have ignored our demands,” the bus driver said. “They’re not defending our rights or the rights of commuters. Like us, the commuters have suffered from the company’s poor services and broken-down buses in the past.”

Meanwhile, soon-to-be unsuccessful candidate for MP George Galloway has pledged his blood to Nasserist presidential candidate Hamdeen Sabahi, who is reported to be associated with the ruling military council.

But another presidential candidate, Buthaina Kamel, has bravely denounced the SCAF while standing up for liberal values.