Islamists in Tunisia may have gone a bridge too far in their efforts to steer the country away from its secular roots since last year’s revolution. 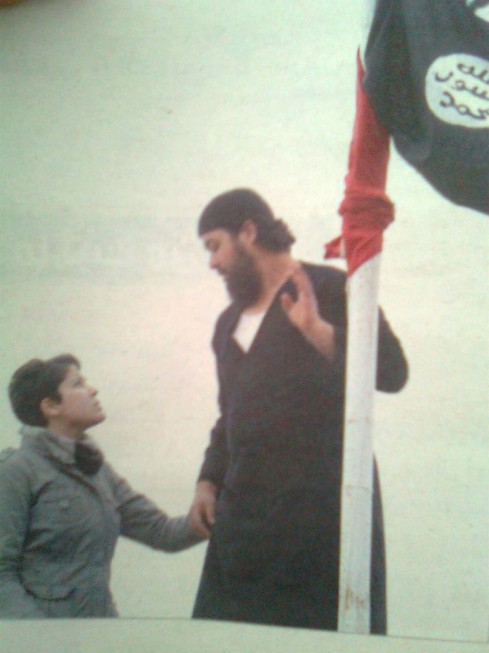 Tunisian politicians and civil society have reacted mostly with resounding nationalist solidarity to the recent incident of flag desecration by religious activists at the Faculty of Arts and Humanities at Manouba University.

One young woman – Kahaoula Rashidi, a student at Manouba University – has attained a degree of celebrity after a video of her attempt to stop the Tunisian flag from being taken down was circulated widely on a number of social media outlets. Moreover, a photo of the confrontation was featured on the front page of the Maghreb newspaper.

Many Tunisians have reacted strongly to the video in which a young man wearing a traditional robe and long beard takes down the Tunisian flag, replaces it with a black flag bearing the shahada (the Islamic declaration of faith) – a symbol associated with Islamic conservatism – and pushes Rashidi off a wall as she tries to intervene.

You can watch the video here:

Several thousand women and men, many of whom were draped in Tunisian flags, gathered in front of the Constituent Assembly in Bardo [March 8] to demand the recognition and reiteration of the rights and freedoms of women in the new Tunisia.

The peaceful protest drew people from a wide range of ages and social backgrounds who rallied around calls for Tunisia to keep a progressive, pluralist identity.

Originally organized to mark International Women’s Day, the demonstration took on added significance yesterday when a Tunisian flag was desecrated during violent confrontations between progressive and Salafist students at Manouba University in the outskirts of Tunis. This event, captured in amateur video, has fast become a rallying point for progressive Tunisians who are increasingly fearful about the influence of Salafism and other Islamist movements in Tunisia.

During the 2011 revolution, the Tunisian flag came to symbolize not only the nation but the aspirations of the Tunisian people. The attack on the flag is being interpreted by many as a symbolic attack on national identity.