On 1 March, the Old Vic theatre in London is hosting the première of Europe’s Last Dictator — a film documenting torture and state-sponsored murder and kidnap in Aleksandr Lukashenko’s Belarus. I don’t know if it looks at the brilliantly subversive Belarus Free Theatre, which has been at the forefront of the dissident movement, but I have been heartened to see British actors — Ian McKellen, Jude Law, Sienna Miller, Samuel West — responding to appeals for solidarity from their fellow performers in Belarus by taking up the cause of the opposition.  Given this admirable record, it is no surprise to learn that Joanna Lumley will be co-hosting the evening at the Old Vic.

It is more of a surprise to learn that standing alongside her will be Julian Assange.

Why was Assange there?

Simple. One of the producers of the film, Matthew Charles, is a fan. 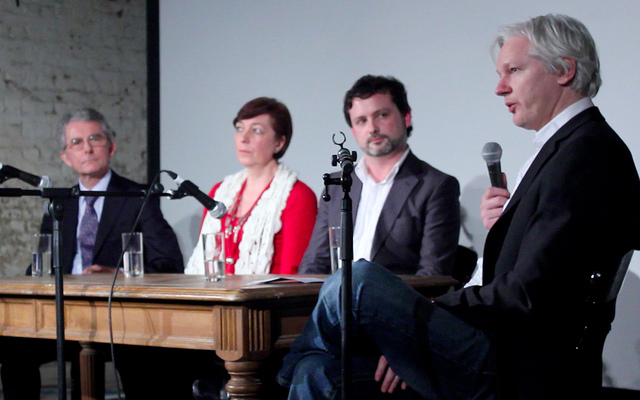 Assange notoriously appointed a Swedish neo Nazi who calls himself “Israel Shamir” as his go-between. Assange even paid him.

The Standard’s Londoner’s Diary called Charles on his bizarre choice to invite Assange to the gala screening this is what he had to say:

However, democracy activists in Belarus are furious with the WikiLeaks boss because they believe unredacted US cables named their members, making them targets for the Belarus secret service.Budding film-maker Matthew Charles, one of the co-directors of Europe’s Last Dictator, has defended his decision to invite the controversial Australian to the screening.

“Nobody has given us any proof of that,” said Charles, of the unredacted cables. “I was given the cables too,” he added. Did they have the names, the Londoner asked? “Yes, some, but of activists already known to the regime.”

Charles says Assange’s critics are confined to the Guardian and Index on Censorship. “There’s a row going on between them and WikiLeaks, and the only people being critical are people from those companies.”Not so. Kapil Komireddi, an Indian journalist who recently reported from Belarus for the US magazine Tablet,  spoke to activists who blamed WikiLeaks for their detention

“Matthew Charles has bought into the cult of Julian Assange and either feels personally beholden to him or drawn to his tawdry celebrity,” he tells me. Charles expects to sell out tonight, presumably helped by Assange’s name.

And that is how Matthew Charles did indeed ‘sell out’ the Belarusian dissidents.