It is difficult really to know what to say about Paul Flynn MP.

Until his remarkable outburst in Parliament, in which he suggested that Jews who supported Jewish self-determination were disloyal to Britain, I had largely associated Paul Flynn with cannabis.

The JC’s editorial puts it well:

There is no more classic antisemitic trope than the idea of the Jew as agent of a foreign power, lacking loyalty to his ‘host’ country. Add to that the idea of a Jewish conspiracy and you have a double whammy. In accusing Matthew Gould, the British Ambassador to Israel, of acting not on behalf of Her Majesty’s Government but the government of Israel, and of conspiring with the Mossad, Paul Flynn, Labour MP for Newport West, is guilty of an unambiguous antisemitism of a directness not seen from an elected politician for many years. It is good to see Douglas Alexander, the Shadow Foreign Secretary, making clear his disgust at his colleague’s remarks. But we need now to see the same from Ed Miliband, who has so far refused to condemn Mr Flynn, despite repeated entreaties by the JC.

But what is most disturbing about this whole episode is that a senior and experienced politician such Mr Flynn can utter words which a neo-Nazi might shy away from speaking in public, and yet have no compunction in defending them when challenged and no conception that he has said anything in any way offensive, let alone antisemitic. There has been a sense for some time in which certain antisemitic themes have appeared to become acceptable in polite society, as if positing a Jewish conspiracy and the issue of dual loyalty is not antisemitic, merely a statement of fact.

Flynn’s remarks have been broadly attacked, by MPs of all parties including Labour:

The Foreign Office and MPs from across the political spectrum sprang to Mr Gould’s defence and condemned the remarks.

Middle East Minister Alistair Burt said: “Paul Flynn should take some time to consider his comments, which could easily be misconstrued. There is absolutely no reason why our ambassador to Israel should not be Jewish. Any allegations about Matthew Gould’s conduct are utterly unsubstantiated. He is a first-class ambassador.”

Douglas Alexander, the Shadow Foreign Secretary, said: “The faith of any British diplomat is irrelevant to their capability to their job. To make suggestions otherwise is wrong and offensive.

“On a personal note I know from my time in government Matthew Gould embodies all that is good in British diplomacy.”

John Mann MP, another Labour MP has been fierce in his criticism of Flynn:

John Mann, the chair of the group on antisemitism, said he was in no doubt “that when candidates are selected for parliamentary constituencies under new boundaries that Paul Flynn will be summarily retired”.

Mr Mann, also a Labour MP, added: “I suggest he starts his retirement with a workers’ education course on understanding racism, its language and its impact.”

There is also an article by Tory MP, Robert Halfon MP here.

First, have a look at what this obnoxious man had to say for himself when challenged on his racism.

“In the past there hasn’t been a Jewish ambassador to Israel and I think that is a good decision – to avoid the accusation that they have gone native.”

Mr Flynn added that the same question of divided loyalty would apply to anyone with a “foreign” family background, including former Foreign Office Minister Denis MacShane, whose father was Polish.

Let’s take a closer look at this statement. Paul Flynn MP appears to be arguing that he is not simply an anti-Jewish racist, but believes that all British people of non-British heritage are to be suspected of divided loyalties.

That hardly excuses his racism. In fact, it makes it worse!

But here’s the thing. I don’t believe Flynn. I don’t think he would raise similar objections to a public servant of any other ethnicity. In other words, Flynn is pretending to be an equal-opportunities racist, to cover his specific racism against Jews. Isn’t that both surreal and disgusting?

The second point I’d like to make is this. Paul Flynn MP raises this racist argument in support of Pippa Bartolotti.

He said doubts had been raised about Mr Gould’s loyalty by two of his constituents, Pippa Bartolotti and Joyce Giblin, who had been held in prison in Israel after taking part in the “flytilla” demonstration against the Gaza blockade in July.

“When they were briefly imprisoned in Israel, they met the ambassador, and they strongly believe… that he was serving the interest of the Israeli government, and not the interests of two British citizens,” he told the committee.

Here is Pippa Bartolotti with the Hamas leadership: 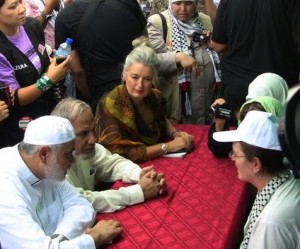 Here is Pippa Bartolotti with Hamas’s Mahmoud Al Zahar, a founder and leaders of Hamas: 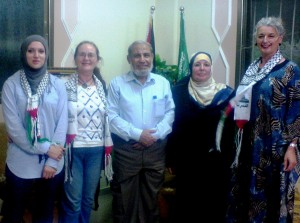 Zahar is of course the man who said Jewish children around the world should be murdered to avenge Israel’s attack on Hamas in the Gaza war.

Not that any of this troubles Bartolotti. This is from her blog:

Mahmoud al Zahar was clearly a knowledgeable man, well educated and by the nature of his knowledge, anti Jew. It seemed to me that he no longer separated Zionism from the ordinary Jew, but living under siege as he did with warplanes and warships continually threatening his people, killing his children and destroying his homes one could hardly blame him.

Here is some more of Zahar’s wisdom, this time about the West, shared in an interview with Reuters.

You do not live like human beings. You do not [even] live like animals. You accept homosexuality. And now you criticize us?

We are the ones who respect women and honor women … not you.

You use women as an animal. She has one husband and hundreds of thousands of boyfriends. You don’t know who is the father of your sons because of the way you respect women.

We understand you very well. You are poor people. Morally poor. Don’t criticize us because of what we are.

And here is Pippa Bartolotti waving the flag of the Syrian Social Nationalist Party. Its symbol is reminiscent of the Nazi Swastika – deliberately so. The SSNP is influenced by the philosophy of German Nazism: hence the give-away inversion: “Social Nationalist” rather than “National Socialist”. 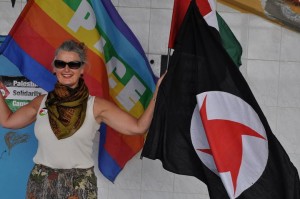 Here’s a little background on the SSNP. Here’s some more.

And here is Bartolotti talking to the Islamic Republic of Iran’s propaganda station, Press TV:

“It’s only the people that are going to make a difference because the governments are pathetically weak. They’re in the pockets of Big Money and Big Money supports Israel”.

So, to draw a parallel: what Paul Flynn MP has done is the equivalent of a Labour MP expressing concerns about the trustworthiness of non-Anglo Saxon British public servants, at the behest of a British National Party activist.

Paul Flynn has been called in by the Chief Whip Rosie Winterton to discuss his comments. The Labour leadership are thought to be unhappy with the remarks – a Labour source said that “Ed [Miliband] thinks these comments are totally unacceptable.”

He really ought to go, and soon.

Could someone find out whether Paul Flynn spoke up bravely against the following:

Anwar Choudhury (Bengali: আনোয়ার চৌধুরী; born 15 June 1959) is the Director of International Institutions at the Foreign & Commonwealth Office. He was a High Commissioner to Bangladesh (2004-2008), and was the first British Head of Mission to be of Bangladeshi origin. Although born in Sylhet Division, in north-eastern Bangladesh, he is a naturalised British citizen; Choudhury has dismissed suggestions of a conflict of loyalty, stating that he would support the English cricket team against Bangladesh…

Now the idiot racist Paul Flynn MP responds. Apparently, some of his best friends are Jewish.

If you are in politics long enough, I suppose everyone is accused of everything.
Today’s accusation is  that I have made an anti-Semitic remark is ludicrous. I have been a lifelong friend of Israel and Jewish causes.I have visited Israel on four occasions  including a private family holiday. Never before in my long political life has such an accusation been made. But I have been accused of being too friendly to Israel on many occasions.
I would advise those making these accusations to read my blog and that of my friend Robert Halfon’s . There they will read the substance of my criticism. It is a demand for a legitimate inquiry into the Liam Fox/ Werrity affair by Phillip Mawer to include a full probe into the USA  anti Neo-con groups influence in advancing their agenda. The Neo-cons groups financed Werritty.
The issue is the possibility of the UK stumbling into a war with Iran.

Others are active fascists. How about an inquiry into that?

Judy in the comments below points out that Paul Flynn’s “grand neocon Jewish conspiracy” argument appears to be based on an article from Counterpunch by Jonathan Cook.

Jonathan Cook is a supporter of Gilad Atzmon. Gilad Atzmon is the subject of a campaign by Britain’s leading anti racist and anti fascist group, Hope not Hate.

Counterpunch itself is a strong supporter of Gilad Atzmon. Here is an article on Counterpunch in support of Atzmon by the lunatic racist, Kathleen Christison. Here one by his one time fan, Mary Rizzo. And another one by Southampton based academic, Oren Ben Dor. And another by Jeffrey St Clair.

Here are some articles by Gilad Atzmon on Counterpunch. They are only a few of those they have published. In this piece, Atzmon bigs up the neo Nazi, Eric Walberg! In this one Atzmon attacks the veteran Jewish anti-Zionist, Lenni Brenner (and identifies Jews with Christ killers).

Paul Flynn MP has fallen in with the Far Right. He doesn’t even realise it.