Here is a picture of Kevin Ovenden, a Viva Palestina trustee, addressing the welcoming party. 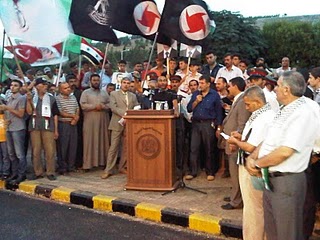 Gosh, those are rather alarming banners, aren’t they? Ah, it’s the flag of the Syrian Social Nationalist Party (SSNP). You can read a review of its bloody history here. A sample:

It is a party whose leaders, men approaching their seventies, send pregnant teenagers on suicide missions in booby-trapped cars. And it is a party whose members, mostly Christians from churchgoing families, dream of resuming the war of the ancient Canaanites against Joshua and the Children of Israel. They greet their leaders with a Hitlerian salute; sing their Arabic anthem, “Greetings to You, Syria,” to the strains of “Deutschland, Deutschland über alles”; and throng to the symbol of the red hurricane, a swastika in circular motion.

George Galloway is a friend of the party.

The video below shows more of the ceremony. Placards of Syrian dictator Assad are proudly held aloft. The regime was there:

Secretary of Idleb al-Baath Arab Socialist Party Branch Abdul Malek Jaafar said “organizing this convoy is a victory for the Palestinian issue in confronting the Israeli occupation as it also supports the Palestinian people in their steadfastness against the Israeli practices.”

And there are more flags, including the black banner of the terrorist group Islamic Jihad and, of course, the green banner of Hamas.

Hamas was represented at the ceremony by Talal Nasser, the terrorist group’s Damascus spokesman. What does he think of Israel? It should be annihilated and Jews should leave:

A ceasefire is a warrior’s rest. Gaza is not everything for us, it’s a transitional period. After the ceasefire, if the Israelis pull out, maybe we will sign a one-year truce with them. Maybe we will sign a truce and after that we will continue to liberate all the Palestinian lands, from the river to the sea, including the 1948 lands. Whoever feels sympathy for the Zionists about this, let them open their countries to them. There can be no accommodation with Israel. Anyone who signs such an accommodation is a traitor. Between us and the Zionists, there is only the language of the gun.

In that interview, conducted after the Gaza war, Nasser also issued a threat to Europe:

The European position through this war was not positive and effectively supported the Zionists. They should understand that Europe will be the first to get damaged by the Islamic movements there. Revolutions always arise out of injustice.

And some of the people taking part in this exercise call themselves “anti-fascists”.