This is a tragedy, notwithstanding that these populations continue to survive and thrive in the one area in the region that offers them a home.

It would be nice to think that one day, it would be possible for Jews to visit the countries which for so long they called “home”. If the story of David Gerbi is anything to go by, that will not happen any time soon.

David Gerbi is the Libyan Jew who returned to Libya to offer his assistance to the new government:

Gerbi returned to his homeland this summer to join the rebellion that ousted Gadhafi, helping with strategy and psychological treatment.

He said his fellow rebels called him the “revolutionary Jew” and that he was thrilled when he rode into the capital with fighters from the western mountains as Tripoli fell in late August.

That hopeful moment did not last: 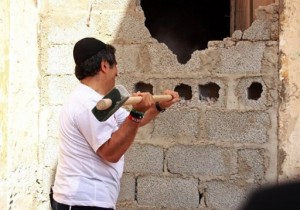 Gerbi said he was told on Monday when he showed up to work at the synagogue that he would have to leave for his own safety.

A man claiming to represent the authorities told him his efforts were provoking anger in the country and that death threats had been made.

“He said ‘there are many coming now, they are coming with guns, if they come you will be killed’,” Gerbi said, adding that he had been told that a major demonstration against his efforts was being organised in Tripoli for Friday.

He left after four men armed with assault rifles showed up at the synagogue and its door was locked.

“I just wanted to clean the synagogue because I don’t like to see it full of garbage, desecrated in the eyes of God,” he said. 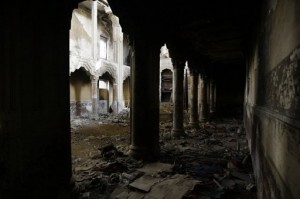 Gerbi said he had begun his efforts at the weekend, paying residents to help clean the temple, which is strewn with rubbish and covered in graffiti after decades of neglect.

A demonstration was called against his project:

Gerbi said he was told a mass anti-Jewish demonstration was planned for Friday in the capital’s central Martrys’ Square, which used to be named Green Square under Gadhafi’s regime.

He said the ruling National Transitional Council (NTC) needed to back his efforts to establish its democratic credentials.

“They need to say to these people: we are pluralistic,” Gerbi said. “You want democracy, you want justice, you want pluralism, you want social rights, you need to take the whole package.”

Their response was not positive:

The head of the National Transitional Council that is governing the country was dismissive of the issue when asked about it at a news conference, saying it was too early to worry about rebuilding a synagogue when revolutionary forces were still fighting supporters of fugitive leader Gadhafi.

“This matter is premature and we have not decided anything in this regard,” Mustafa Abdul-Jalil said. “Everyone who holds Libyan nationality has the right to enjoy all rights, provided that he has no other nationality but Libyan.”

Breaking down in tears, he criticized Libyan authorities for withdrawing their support, calling his efforts a test of the post-Gadhafi regime’s commitment to democracy and tolerance.

“If they want to prove that it’s different from Gadhafi … they need to do the opposite,” he told reporters after leaving the synagogue in the old Jewish quarter of Tripoli’s walled Old City.

But he will continue fighting:

Gerbi refused to give up, saying he would stay in Libya and press his case with the government.

Gerbi said he planned to visit a Jewish cemetery, despite the possibility that he could be at risk in Tripoli.

“I am sorry for the people who love me,” he said, weeping.

Libya’s one surviving Jew does not herald a return of any kind.