When Jayson Blair was discovered by the New York Times to have lied and invented stories, the newspaper underwent a massive investigation and published its findings on the front-page — but not before sacking Blair.

It would stand to reason, then, that when another prominent journalist is exposed as a liar and a fraud — someone who misappropriates or invents quotations, and spends his nights libeling people as anti-Semites and homophobes on Wikipedia — the NYT ought to put a bit of daylight between itself and that journalist.

So what’s Johann Hari doing with a critique of a new book on famine in this week’s Book Review? And have all the quotes in this piece been, erm, double-checked for accuracy?

Hari hasn’t even attended to journo school to be properly re-anointed as a legitimate hack again.

Alec adds: From the dusty shoe-box in the bottom drawer of the sideboard we get the frontpage of the Independent on 28 January 2004. 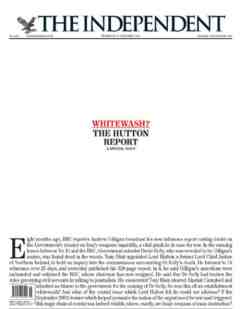 Alec adds again: Matt in the comments finds in another shoe-box a piece from 4 May 2006. Ed Ceasar of the Independent interviews Jayson Blair.

It was a byword for journalistic integrity, a beacon of truth and one of America’s proudest institutions. Then, in 2003, The New York Times was brought to its knees. A 27-year-old reporter, one of the newsroom’s brightest stars, was exposed as a plagiarist who fabricated stories and concocted quotes.

But if the scandal itself was explosive, the fallout was nuclear. The New York Times has always held itself up as “the paper of record”. So how had a 27-year-old loose cannon like Blair been allowed to fool the newspaper and the nation? Had he been given more rope because he was black? How had Howell Raines, the paper’s executive editor and the most powerful journalist in America, lost control of the newsroom? And if the pre-eminent source of hard news in the US could not be trusted, what did that say for the American media as a whole?

This would make a monkey blush.