This coming Thursday and Friday, 1st/2nd September 2011, the Centre of Syrian Studies at St. Andrews University is hosting a postgraduate conference on Syria, entitled “Syria in a Changing World“.

What can we expect from the Centre of Syrian Studies?

On the page for the Centre of Syrian Studies, you can see a list of articles about Syrian politics that the school recommends. St. Andrews calls this page the Syrian Current Report. Although all of the links are now broken, all the articles were previously hosted on the St. Andrews website itself. 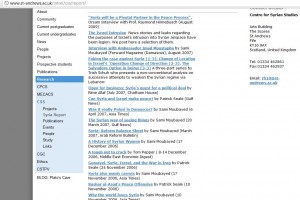 Pay attention to the series of articles by Trish Schuh.

Her first piece is entitled “Faking the case against Syria (1-3)“, and is still hosted on Counterpunch.

Quite. The article contains an assortment of accusations against Israel and Lebanese Christians, namely that they are “neocon” agents of America who want to turn Syria into the 53rd US state – Israel and Lebanon being the 51st and 52nd.

Schuh begins the piece arguing that there is a conspiracy to find Syria guilty of the murder of Hariri.

The sub-heading of her piece announces:

Mehlis’s Murky Past; US and Isreali Proxies Pushing the Next Neo-Con War.

Another slam dunk forgery is being used to convict Syria. The United Nations’ Detlev Mehlis inquiry into the murder of Lebanon’s former Prime Minister Rafiq Hairri depends on a central witness, Zuhir Ibn Mohamed Said Saddik, who has faced accusations of being a swindler and embezzler.

Saddik was one of many key witnesses in the Hariri trial, and the fact that he was interviewed does not prove a “neocon” conspiracy against Syria, at all.

When Israel’s commandeering of US middle east policy became too overt, defter tongues moved to quell the uproar. “

There is this slur against the Reform Party of Syria:

Syria may become America’s 53rd state, if Farid Ghadry’s NGO, the Reform Party of Syria rushes through that opened door. Ghadry is a Syrian Christian who worked for EG & G, a Department of Defense contractor. EG & G assisted in the development and testing of nuclear weapons and in many of the US military’s top secret atomic projects. Ghadry’s Reform Party coordinates with the Syrian National Council, and transmits Radio Free Syria from Cyprus and Germany to destabilize Syria. The CIA and Mossad have long used Kurds to target nations in the region.

So it is not the Reform Party of Syria who actually want reform, rather they want to “destabilize Syria”, working with foreign agents to bring this about.

Meanwhile, various other articles explore the potential of Bashar al-Assad to reform Syria.

The head of St Andrews’ Centre for Syrian Studies, Raymond Hinnebusch, writes in one featured article:

What went wrong for Bashar is that his accession to power (and reform project) was paralleled by that of George W Bush in Washington who pursued the opposite sort of US policy in the Middle East.

So Bashar is the reformer, and the USA and the Reform Party of Syria are working to stop this (along with Cyprus, Germany and Mossad, apparently).

What else can you find on the St Andrews website?

You will see a sickening, fawning piece by Patrick Seale, a fan of murderous dictator Hafez al-Assad. The piece is entitled “Syria’s Peace Offensive“, where we read:

Peace is the buzz word in Damascus these days. It is the recurrent leitmotiv of the President’s statements and those of his senior officials. The message they want to convey to the West – and especially to President George W. Bush – is that unless the Middle East peace process is immediately revived, the region will succumb to extremism and war.

In this narrative, Syria is not arming Hezbollah against Israel or hosting Hamas in Damascus, but rather stemming the tide of Islamic extremism and anger by emphasising peace not war, and telling Israel how to behave peacefully. Seale concludes his article:

When the matter of human rights is raised with Syrian officials – particularly the jailing under harsh conditions of civil rights activists and political opponents – they point to far greater abuses by the United States and Israel. Western actions, they claim, have damaged the cause of democracy and human rights. Nevertheless, Syria’s record on human rights is improving, says Foreign Minister Muallem. It needs encouragement to improve still further, he adds.

But in reality, Syria’s human rights violations are amongst the worst in the world. This has been well known for a long time.

Other articles on the St. Andrews website do express some hope for reform, within the context of Bashar al-Assad’s domestic policies.

Although St. Andrews qualifies this page with the disclaimer that:

You have to wonder why St. Andrews has posted these articles at all, indeed, hosting them on their website.

The actions of Syria’s brutal regime, in the last few weeks and months particularly, should spur St. Andrews to clean up its act, with regards to their dealings with Syria.